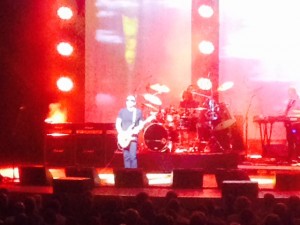 Birmingham’s Symphony Hall, set inside the large International Convention Centre in the heart of the city, is famous all over the world for its acoustics and near perfect soundscapes. Whilst such a setting may be wasted on death metal’s finest it is a very appropriate venue for the wizardry of, arguably, the greatest guitarist on the planet, Joe Satriani.

However, this grandiose setting is not immune to the equipment issues that plagues every band that plays venues from Wembley stadium to the local pub. 10 minutes before support act Dan Patlansky is due on stage one of the amps blows up. This gig may be more rock n roll than first thought!!

If you think that loud bangs and smoking amplifiers puts South African Blues supremo Dan Patlansky off his stride then clearly you’ve never seen him play. His 45 minute support set starts with a slow-burn blues number that hints at the raw power of tracks like “Fetch Your Spade” and the hauntingly brilliant “Hold On”.

He closes the set with some eclectic guitar interplay that whilst impressive on a technical level was somewhat pointless in truth. He could have finished on a high with any number of his impressive back catalogue but the holding out his guitar in one hand and occasionally flicking it was not much by way of a set closer.

That said taking the set as a whole he, backed by his rhythm duo, was very impressive and certainly deserves to get some the acclaim afforded to his peers like Joe Bonasmassa.

It’s always great to see a top notch support artist but it’s the headliners that brings the crowds and today three levels of the Symphony Hall are packed with Satch’s hardcore fans and a few young pups eager for their first taste of the great man live.

The great thing about Satriani is that no matter when you are seeing him for the fiftieth time or the very first he never lets you down. There are no clichés to be tagged to Satch. No great dramas unfolding. You just know that what you are going to get is the most breathtakingly brilliant display of virtuoso guitar playing and song craftsmanship that is available. There are countless awesome guitar players on this planet but none can match Satch for song construction, feel, emotion and reinvention.

As a guitarist myself, a guitarist of zero repute it must be stated, it is difficult to believe that we play the same instrument such is his mastery of the fretbroad and the skill with which he can bring his musical ideas to life. This is displayed perfectly in the opening track “Shockwave Supernova” with it’s intense riffing providing the background for the technically melodic passages that marks out Satriani’s music.

Unlike many artists with a back catalogue to die for Satch never falls into the trap of solely focussing on former glories instead he chooses to play a very healthy mix of old and new. This is never better illustrated then when “Flying In A Blue Dream” quickly follows. “Ice 9” is hot on it’s heels and it’s going to be one of those types of evenings.

As always with the modern-day Satch live experience the video wall provides entertainment, reminiscence, and great visual representations of the man’s music.

Of the new tracks the short “Butterfly And Zebra” is a light high and the superb “On Peregrine Wings” would grace any of Joe’s impressive back catalogue that occasionally adorns the video wall to remind us of the music he has given us over the past 30 years.

Of course, talking only about Joe would do a massive disservice to his superb backing band with the sublime drummer Marco Minnemann and the multi-talented Bryan Beller on bass. Joe, would himself admit that no current live show would be complete without the genius of his sidekick, and phenomenal guitarist in his own right, Mike Keneally. The two engage in a duel that swaps lightsabres for guitars on “Cataclysmic” both leaves both men standing with pride and bragging rights intact.

Satch’s voice gets an airing on the funked up “Big Bad Moon” and over the course of 2hrs and 15 minutes there is barely a misstep and classics like “Satch Boogie” and set closer “Surfing With The Alien” are as close as you get to sonic instrumental perfection.