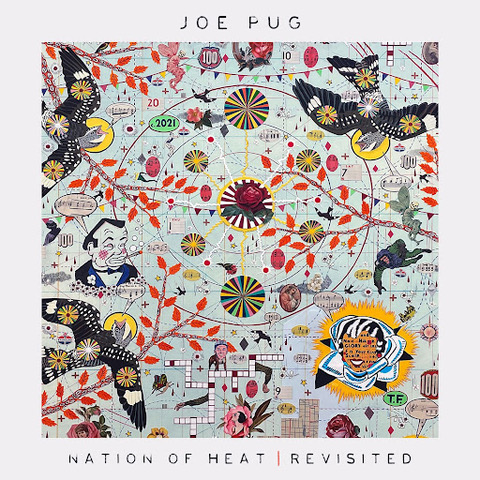 Joe Pug is an American singer-songwriter from Greenbelt, Maryland whose debut EP `Nation Of Heat` sold over twenty thousand copies and was recorded just after he dropped out of college at a Chicago studio that his friend had snuck him into when other musicians had cancelled, It was a pretty stripped back offering and the singer has always wanted to re-record the songs in the way he “had always wished they could have been”

This revisited release opens with `Hymn #101` and obviously has a much fuller sound but retains that pleading, passionate vocal delivery. It paints a larger than life visual story through the lyrics and for me the line “I knew before we met, we`d meet” really struck home for some reason. The addition of organ, pedal steel and piano really brings this number to life. There`s a more anthemic Americana tinged almost road trip feel to `Nobody’s Man` which ebbs and flows with an organ kind of guiding us. A song that maybe hints at leading your own life on your own terms.

`I Do My Father’s Drugs` begins with a shimmering synth sound before harmonica and a steady drum beat allow the vocals to convey a tale that could be interpreted in a number of ways. The vocal delivery relay an exasperated, reflective almost world weary sense of what the narrator has witnessed and lived through. There`s an almost spiritual sense  to `Hymn #35` which possibly hints at something omnipresent. A song that is piano led with some wistful harmonica flourishes interspersed throughout and vocals that share the message almost dispassionately, allowing your own analysis.

`Call It What You Will` hints at the break up of a relationship, which still resonates deeply with the raconteur and the accompanying music is pitched just a the right level of melancholy with a lightly tapped drum, gentle guitar chords and pedal steel that adds poignancy to this emotive tale. There`s a further narrative that eludes to romance with `Speak Plainly, Diana` but conceivably with a more positive outlook this time. A dreamy thoughtful submission, where the narrator asks their partner to take a chance with them on a future together.

Title track `Nation of Heat` closes out this extended play and it`s a kind of road trip through the land of the singer`s birth. A song that is patriotic but also eludes to its shortcomings. A considerate and contemplative composition to end on.

It`s difficult to express just how good `Nation Of Heat` (Revisited) is. I have to confess that I’d never heard of Joe Pug before this release. I also listened to the original version which is pretty stunning as well. I now have this singer–songwriter`s back catalogue to explore.

If you`ve never heard of Joe Pug, I can recommend that `Nation Of Heat` is no better a place to begin.