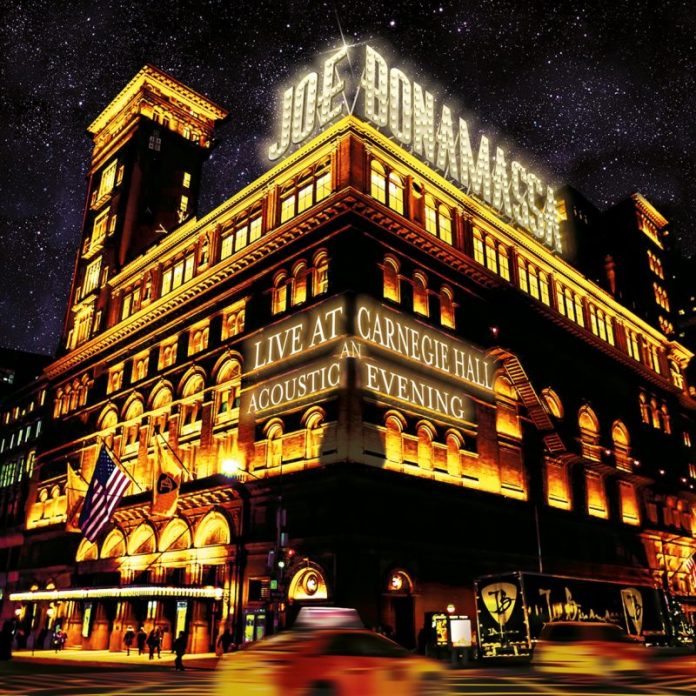 The King finds another new direction

The wonderful comedy series Fraiser once featured an episode where someone was trying to preach the virtues of sparse to the eponymous hero of the show.

“Less is more,” they said. “Ah yes,” came the response, “but if less is more, then just think how much more more could be.

That is a view that Joe Bonamassa subscribes to as well. This DVD/CD/Vinyl release of what – according to the title – is an “acoustic evening” actually features a nine-piece band, oh and just for good measure was filmed at New York’s iconic Carnegie Hall venue.

But then, Bonamassa has never done things by halves. This comes hot on the heels of his homage to the Three Kings, his magnificent Muddy Waters Tribute DVD, his shows celebrating the British Invasion and his quite stunning “Blues Of Desperation” record from 2016.

Less is not more here. However the thing about Bonamassa is whatever he does, he does it so well that he is absolutely without peer.

The two hour set is heavy on latter-day Joe stuff, which is just fine, because in addition to everything else he is, he has in the last decade proven himself to be one of the finest songwriters around as well.

And he realises that the absolute best acoustic versions of great songs, have always been the ones that find something new to say. The astonishing reworking of “Driving Towards Daylight” here does exactly that.

In truth though, all that is here from “Drive” – one of a trio of …..”Desperation” songs he kicks off with – right through, are all sprinkled with a rare kind of gold dust.

It helps that for this, Bonamassa has surrounded himself with a slightly different – but brilliant – cast. Joining his usual lieutenants Reese Wymans and Anton Fig – are the incredibly talented Celloist, Tina Guo and Hossam Ramzy, an Egyptian Percussionist who has worked (amongst others) with Robert Plant. They are augmented by songwriter and musician extraordinaire Eric Bazillian, who plays just about everything you can imagine and a clutch of backing singers including Mahlia Barnes, with whom Bonamassa collaborated on the “Ohh Yeah” album (a soulful left turn).

The standout moments just keep coming, whether it’s the jaw-dropping solo on “Black Lung Heartache,” during which JB pulls off the trick of making it look like he’s busking in your living room, the take on “Blue And Evil”, or the sassy jazz stylings of “Livin’ Easy” then whatever you desire is right here.

There’s a sprinkling of covers too. An interpretation of the Ry Cooder classic “How Can A Poor Man Stand Such Times And Live” is almost the central tenet of this, and rightly so.

Where JB has always shone was the accessibility of his work. He knows he can play the guitar in a way mere mortals only dream of, but he never feels the need to ram it home on every song, and on the rare occasions he does, as on the musical gymnastics of “Wake Up Dreaming” – an incredible duet with Guo – he makes a joke of it: “that’s a lot easier than it looks” he smiles. No one believes him.

Indeed, although as usual he lets his music do the talking, Bonamassa has a captivating charm, and as he returns for the encore, he jokes that they have to be out by 10pm as the union fees go up and “simply, we only know one more song. “ What a song it is too. A gorgeous, haunting version of “The Rose” made famous by Bette Midler and recorded by everyone from Conway Twitty to Westlife. Right to the end, it seems, Joe Bonamassa wants to confound expectations.

Long may he do so too. Artists such as him, who take so many gambles, do so much, and do it so well, are a rare thing. He’s not just the king of the blues, Joe Bonamassa is close to being in a league of his own wherever his career takes him.