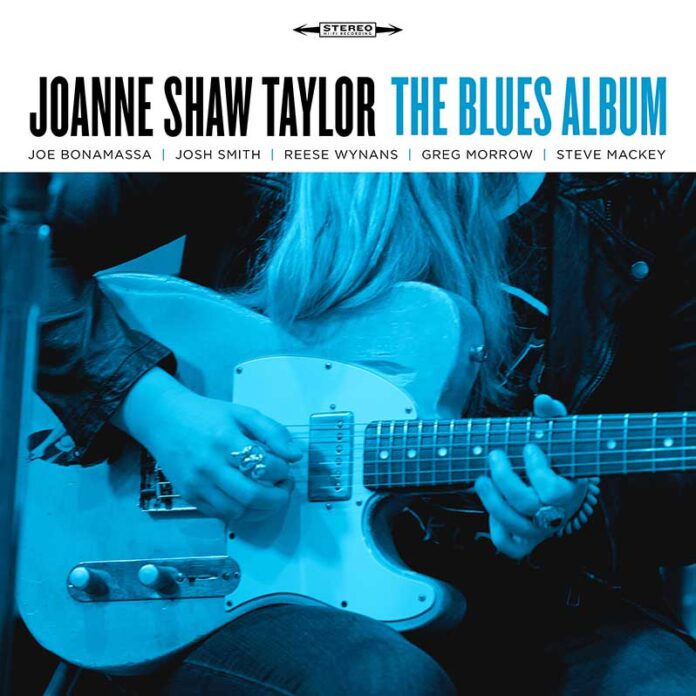 You can’t judge a book by its cover, apparently.

That is one of many things you are told that is basically nonsense. When I was a kid, me and my mate used to buy records literally based on the fact that the tape had the distinctive red and white Atlantic sleeve. We knew that was a mark of quality (think of it like a Spotify suggested bands thing for the early 90s). To this day, you can kind of work out if you’re going to like a band based on the logo (if I can’t read it, its too heavy, basically).

Which brings me to “The Blues Album”. Without resorting to cliché (too much) the way to look at it is that it does what it says on the cover.

This is Joanne Shaw Taylor making the record she was always meant to, I guess. The other key to it, are these words in an interview to coincide with the record’s release: “Thankfully, he accepted. The Blues Album has been everything I hoped it would be. It’s been a labour of love, overseen by an artist, producer, and friend who I trust beyond measure.”

“He”, the “friend”, is Joe Bonamassa, and you imagine that as soon as JST began thinking about this album JB was all over it. “He was texting song suggestions” she says. I’ll bet he was! Which brings me to the next point. The songs on “…Album” are handpicked by a blues purist and in all candour, the person writing this is not one of those. I like some blues, I don’t know many of the originals here (if you ever want to do an album with covers of UK Rock bands of the early 90s, I’m your boy, Jo!). Bonamassa does, and Taylor interprets them brilliantly.

“Stop Messin’ Round” with its screeching boogie is a perfect opener, so sexy that it would make a prude blush…..nonetheless, the quality of everything here, goodness me, Reese Wynans piano is worth buying the album for alone, shines through.

The choice of songs cannot be overlooked, either. The slow and slinky “If This Ain’t A Reason” is laced with horns, and “Keep On Loving Me” sounds like it belongs at about 2AM in the morning in some smoky prohibition era jazz club. But what they both – and the others too – have in common is they are vehicles for JST’s voice as much as her guitar. We shouldn’t overlook that voice either, and I’d say it has never sounded better than it does here.

“If You Gotta Make A Fool Of Somebody” a big, soulful showstopper of a ballad is wonderful, and Bonamassa guests on the jaunty, fun “Don’t Go Away Mad”, and that fits superbly as “fun” sounds like a good word for all of it.

Some of these are huge in scope.  “Can’t You See What You’re Doing To Me” thunders with a real intent, while the more stripped down “Let Me Down Easy” is yet another vehicle for the incredible horn playing that’s on this album throughout. Steve Patrick (trumpet), Mark Douthit (sax), Barry Green (trombone) deserve special mention.

It’s interesting that she covers the Fabulous Thunderbirds “Two Time My Lovin’” (one of the ones I did know prior to this) given that generally she sounds about the least likely person on the planet to share her affections, frankly. It’s a highlight, though, that’s for sure.

The glorious musicianship is something you keep coming back to, but only because it’s so good. “I Don’t Know What You Got” is delivered by experts, and Josh Smith (who produces here along with Bonamassa) is a perfect foil, and the brilliant bar room honky tonk of “Three Time Loser” (done by Bonnie Riatt if I recall) is a stratospheric record.

Earlier in this review I said that “The Blues Album” was the record she was “meant to make” and that’s true, to a point. The fact is that Joanne Shaw Taylor has always had more to her than “just” blues, but it’s clear where her heart lies – and the true skill is that whether you live and breathe the sounds or are only on nodding terms with the Three Kings, there’s so much to enjoy here.