REVIEW: JITTERY JACK WITH AMY GRIFFIN ON GUITAR – GONNA HAVE A TIME (2019) 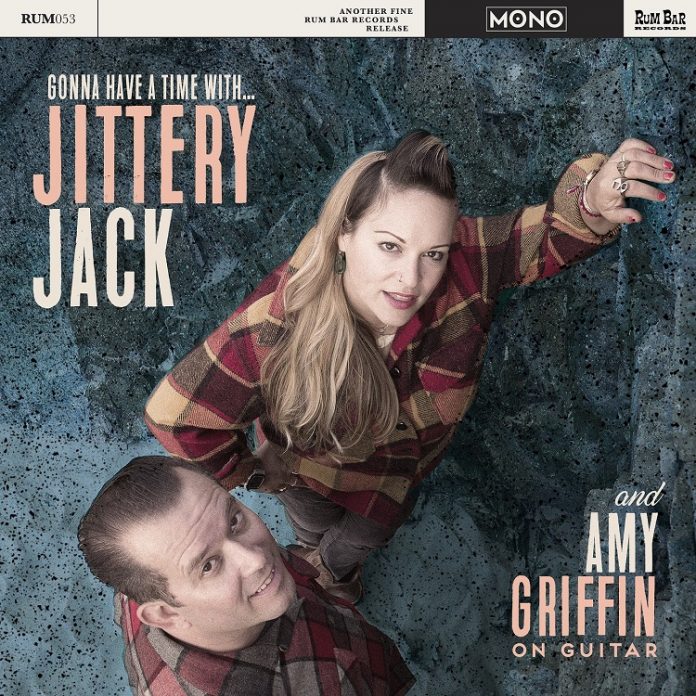 It’ll come as no surprise to anyone who knows me, but I was a geeky loner as a kid (clearly I have changed loads now I am an adult, obviously….) one of my favourite things to do as a little lad was to pretend I was a DJ and cue up loads of singles on my gran’s old Dansette Record Player that I had acquired.

If you aren’t familiar with it, you could stick loads of records on it at once and the arm would come over and put the next one on when one finished.

I used to spend hours doing it, talking rubbish to myself as I did – I suppose in many ways this website is the modern equivalent! But in doing it, I got to listen to my mum’s old records. I was only about six or seven at the time, so I didn’t really have many of my own, but no matter, Mum had some ace ones. Old time rock n roll, Little Richard, Elvis (although it probably was only 25 years old at the time, which is crazy).

I can’t begin to overstate the influence it had on me, and my tastes. It still does, goodness me, The Stray Cats record from earlier in the year had me in raptures, for example.

But specifically for now, what it means for “Gonna Have A Time” is not  just is only marvellous, but it most definitely caused me to get all nostalgic.

13 songs, 31 minutes of the purest rock n roll you can ever think of. Right from “Something Wicked This Way Comes” – which actually sounds like it comes off the Reservoir Dogs soundtrack – to the glorious romp of “You Drive Me Crazy” this is your time travel back to that time when a kid from Tupelo strolled into Sun Studios to record a song for his mum.

In truth it went on before The King, I know that, but everything here feeds into my – and maybe your – romanticised view of American pop culture.

Growing up, I wanted to believe that music like “Gonna Have A Time” was coming out of every diner, that everyone dressed like they were in Grease, and they were all drag-racing along the High Street. “Boston (My Home Town)” is similarly rose tinted (but gets bonus points for spelling Massachusetts out and still being catchy).

“Dance Adrienne Dance” rumbles along with its drums, its harmonies are pure 50s, and Amy Griffin is perfect on guitar. Her and Jittery Jack clearly have an alchemy, and this is similar in style to something that JW Jones might do.

The Stray Cats has simply got to be in the mind when “Heartbreaker” and the likes are played, “Boston Baby” has the same vibe as Chuck Berry, and “Lets Get Loose” has you jitterbugging (I don’t actually know what that means, just that sounds 1950s to me, so that’ll do).

I did think about researching to see if some of these were covers, so authentically old school in their vibes are they, but you know what? I don’t care, because “Full Moon Snow” invokes some country chug, “Little Red Book” boogies with all kinds of innocence, crikey, even “Peek A Boo Honey”, which might actually be unsettling sounds as wholesome as a three year old’s Christmas Party, really.

I just hope that “See You Friday” was played on the upright bass while they were all dressed as Teddy Boys. Even if it wasn’t, it was in my head and that’s all that matters, and “Tell Your Story Walking” is literally the happiest sounding break-up song there has ever been. It actually sounds like it’s off to the town for a milkshake and to meet someone new that very night.

The other week I reviewed a tribute to Chuck Berry. The all-star cast didn’t save it from being a bit dull, this – although musically in the same wheelhouse – is way, way better. Jittery Jack And Amy Griffin have given you a good time.

This one is for the rock n roll geeks everywhere. If you have an old style Jukebox then make sure you play it on that.