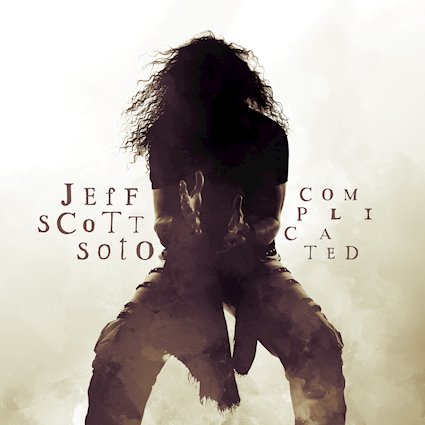 I reviewed a Jeff Scott Soto record back in 2020 and I wrote something like “if you like any of his previous releases, there’s something for you here. If you don’t then you probably won’t be reading this anyway.”

On refection, I think I was wrong.

And the reason why I was wrong is writ large throughout “Complicated”. It’s – forgive the obvious play on words too – not complicated either. You see, Jeff Scott Soto is simply the best at what he does in the world. And, as such, rather like any craftsman, whether you like the eventual outcome or not, you can surely appreciate the skill.

“Last To Know” for example, tells you everything you need to know. Like some demented Andy Gray commentary from years ago, as it finishes you feel compelled to say “that’s quality and that’s class” – because everything about it screams those words.

If that one soars, then the next one “Disbelieving”, comes in with an intro that seems to reprise his Sons Of Apollo days. Muscular, groove laden, and of course, that only happens because JSS has aligned himself with some of the best musicians there is. Fabrizio Sgattoni’s guitar on this one (and throughout the record) is stunning.

There’s a bit of an old school feel about this – as if Soto has rifled through some of the early part of his 60 odd releases for inspiration – and “Home Again” has a pleasing AOR from 1985 feel, that is to say, there’s a heavy tinge to it.

As ever with Soto there’s a lot to unpack, and the eastern flavours of “Love Is The Revolution” are the type of thing that Glenn Hughes does when he gets new-age, which is followed by a ballad that is just gorgeous. “Until I See You Again” does that thing where it tries to sound stripped down and ends up still sounding huge. The keys here through Alessandro Del Vecchio under the spotlight (he’s in just about every melodic rock band in the world, but for now just think of Hardline) and he is Soto’s equal for sure.

The title track is muscular, but the roar of the chorus would shake an arena (there’s a reason Journey used Soto as singer for a spell) and a record that is best described as “timeless” benefits from having a song like “Don’t Look Back” on it, given it could have appeared on those albums we brought in 1989 in Reddington’s Rare Records in Birmingham just because they had the red Atlantic spine just as much as it could have come out in 2022. Why? Well because it exists on its own terms and isn’t worried about trends.

The same goes for the rest, too. “New Horizon” is faster and lets its hair down, if you will. “Back To The Beginning (the title of which is perhaps indicative of the ‘return to the roots’ feel of the album) is so 80s it has shoulder pads and wearing a Frankie says Relax t-shirt, but its irresistible, and if – I’ll be honest here – I’d scanned the tracklist of this and assumed “Thank You” was going to be a ballad with the hookline of “thank you for loving me,” or some-such saccharine, then I am happy to say I was wrong.

Indeed, the last one, “Obsession” carries on the tempo and eschews the balladry (which is entirely to its credit) but there’s something that sticks out like a sore thumb. At the time of writing (and I am reviewing it listening to Spotify, its had around 4500 streams. Not only is this probably enough to buy Soto a Costa given the royalties issue, it is a sad indictment on the relative fame of Jeff Scott Soto. He should be lauded everywhere as having the best voice in rock. He should be recognised as a melodic genius for all he’s done over the last 30 odd years. “Complicated” proves it yet again – although he’s never made a bad record (I haven’t heard all 60 in his canon mind you) this one is a damn good one.

For goodness sake world, get on board with this, will you?