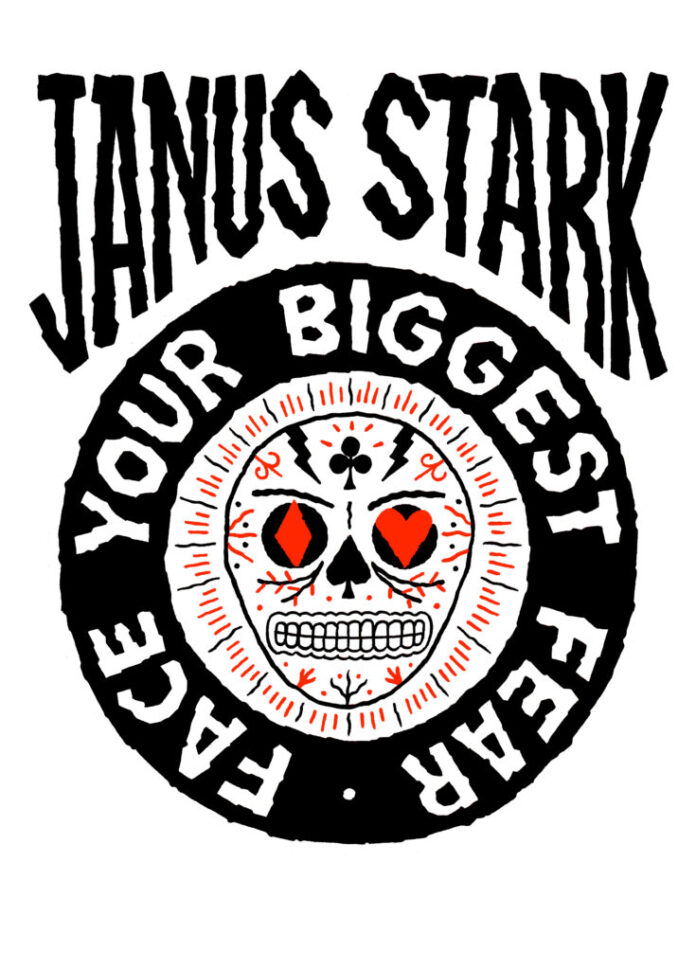 It seems, right from the off and “Father Time” that this is a rather more reflective record than you’d perhaps imagined.  The song very obviously dealt with death – and its his parents that are occupying Janus Stark’s Gizz Butt here. Losing a parent has a way of making you take stock.

Some 40 minutes later “Shoot Me If I Don’t Have The Right” is a quite stunning eight minute long epic that deals with those people that come into our lives and change things. People that bring each other together. Listening to the lyrics as I have over the last couple of weeks, the line about “while he was living there was an island of truth” has resonated again and again and you wonder what he’s getting at, who its about. Keith Flint was the obvious thought (for the unknowing Butt was the guitarist when The Prodigy ripped up the rule book in the late 90s), and it seems from the sleeve notes that he was – in part at least  – the subject.

That those two brilliant songs bookend “Face Your Biggest Fear” struck me. Introspective, but in very different ways, they are neither your conventional “punk” songs.

Janus Stark, though were never quite the conventional punk band. They were a natural band for a Three Colours Red fan to gravitate to in 1998 when their debut record came out. “Great Adventure Cigar” spawned “Every Little Thing Counts”, one of the great songs of the era, and there’s a similar late 90s vibe about the songs here.

Certainly if you liked them back then, then “Rolling With The Punches” is the sort of thing you’ll love. The addition of Richard Gombault (who I saw open for Feeder way back when he was in Midget) adds a bit of a crunch, and when coupled with the acerbic wit of the lyrics combines to make this their best record for 20 odd years.

Proud outsiders, underground and independent. “you can stick your sympathy…..I’ll stick to the back of the class” offers “I Don’t Want Your Sympathy” and it does so in a way that suggests you best not question them.

There is, arguably, a greater focus on the melody here. Dare we say maturity? Whatever “Eddie N Larkin” is quite simply wonderful. Harmonies, the way the chorus at the end changes gear to reach a crescendo. All is a fine example of what can be done if you so choose – and still maintain a punk sensibility.

Wildhearts Fans – and lets be honest I saw JS open for Ginger and the lads twice in 2019 – should get themselves to “One More Ghost” immediately. There was Wildhearts b-sides like this  when B-sides were a thing.

Side 1 ends with “Clusterfuck”. This is an album designed with vinyl in mind and its only digital option is on Bandcamp, but in common with any number of the others this is the type of song that you’ll hum at 3.30 on a Thursday when you’re at work (maybe ……ahem!). Indeed, they all fizz a long with all the vim, vigour and colour of a bag of Skittles, even if the words take us to some dark places then the music does not. “Reassuring” reckons “things are getting better” and it sounds like that too.

Fozzy’s  drums provide the bedrock for “Mariana Trench” which actually is the embodiment of everything this record stands for. Dark, deep and brutal on the one hand, cracking off like a sparkler on the other.

“Stick” isn’t a million miles from the sort of biker rock n roll that Ricky Warwick does. It’s got one of the great lines on too. “There’s two sides to the story, and in both of them you’re a dick” offers Butt here, over a plea that we agree to disagree and there’s a bit of a metal riff on “My Culling” (metal’s mixer to the stars Andy Sneap is handling the sound here after all) but it’s the last one, the aforementioned “…..Right” that most convinces this is not just a fantastic record, but an important one for the band.

Cathartic, socially aware, but still beating with a punk rock heart. That’s Janus Stark generally, and more specifically that is “Face Your Biggest Fear”. An album you must hear, if you’ll forgive me the terrible poetry.