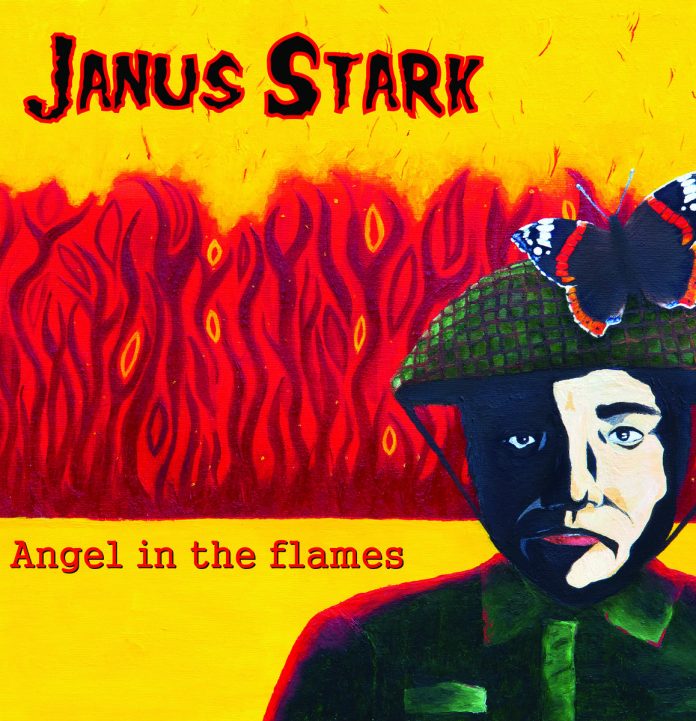 I read this on the internet (so it must be true, right?) but apparently, for a man, your tastes in music are formed between the ages of 11 and 14.

Of course, you’d say such things were rubbish. And I did when I saw it. But, here’s a fact. I was born in 1975, and my favourite record is “Appetite For Destruction” – which came out in 1987. Then there was the other part to that study. The age at which your musical exploration peaks is 24. Now, I will humbly suggest that might be nonsense. Except, the late 90s, you know, crikey it was good. The Wildhearts, Backyard Babies, Corrosion Of Conformity, Three Colours Red, Honeycrack. Come on, I barely miss a chance to shoehorn mentions of them into any review I do, even now.

And right into that mix came Janus Stark. Their Great Adventure Cigar record (from ’98) was a belter, I can actually remember going into the record shop that I used to go in most days and have the fella say to me: “Here, And, I think you’ll like this, give me the money tomorrow if you do, as he handed me a single called “Every Little Thing Counts” from it.

Then they disappeared. Main man Gizz Butt was a touring member of The Prodigy (he’s been in English Dogs and Crass too) and I’ll be honest, apart from the occasional playing of “….Counts” when I happened on it, and thought to myself, “ooooh I haven’t played this for ages,” I hadn’t given JS much thought until I turned up at The Junction in Cambridge in the autumn to watch The Wildhearts and Ferocious Dog. Opening that night were Janus Stark (these days no doubt people thought they were named after a character on Game Of Thrones!) and Butt played a couple of new tunes.

Fast forward a few months, and those tunes are on this. “Angel In The Flames” their first album in 21 years. Let’s get the spoiler alert thing done right from the off, shall we? It’s worth the wait.

It’s worth the wait, because it sounds like it is Janus Stark, and takes you straight back to a time when we had a Labour Government, the world was alright and Tony Blair hadn’t gone mad and dragged us into an illegal war.

Moving on (ahem!) the thing kicks off with “Crucify All The Leaders” (one that he played that night in Cambridge, and again the next week when I saw them in Wolverhampton). In the review of that gig I said: “it showed their relevance in the 21st century” and that’s sort of the point, because yes, this sounds like Ginger’s mob jamming with 3CR on some Honeycrack stuff, but the lyrics are contemporary.

And there’s a whole lot more going on than mere Cool Britannia nostalgia. This new line up is cool, but their trump card is Butt. His guitar playing is top notch – the solo on “Commodity Awakening” is utterly fabulous. That is just one example.

The melody all over the record, is right to the fore on “Last Exit To Change Your Mind” – perhaps the best thing this has to offer – and such is the sweetness of the punkish attack, that you don’t necessarily notice the acerbic nature of the lyrics on stuff like “Murderers Right’s Society”.

That’s a skill, though, and one which is on show everywhere you look. “Dead Dead” has a kind of Foo Fighters thing going on (Dave Grohl is a fan too), a sort of understated chug and just for a minute I thought Def Leppard’s “Armageddon It” was going to break out after the riff for “Karmegeddon” starts up (maybe it was a homage, who knows? Who cares?)

“It Can Be Tough Up There” does nothing to dampen The Wildhearts comparisons (it could have come straight off their “….Must Be Destroyed” album) before “Some Stars Never Fade” changes pace altogether. It’s not a ballad, don’t worry. Instead, its exemplary power pop.

“In The Backs” is one of the most overtly punky, which is fun, but “Shuffling The Pack” is a real jolt. Proper, genuine metal. It’s almost as if Butt is daring you to second guess him, and “Those Who Realise” redresses the balance somewhat, anyway.

“Angel In The Flames” flies to a finish too. “A Traitor’s Call” is another from the heavier end, maybe, but rather more importantly it underlines that Janus Stark belong in the 21st century, just as much as they did in the 20th.

Moreover, if you liked them in the late 90s, you’ll still like them. Assuming your tastes haven’t changed. Which they haven’t. The internet says so, after all.