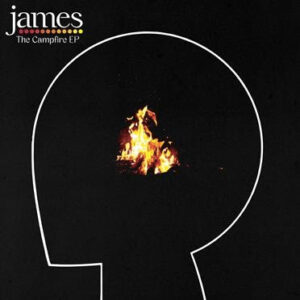 James released their sixteenth studio album `All the Colours Of You` in June of this year and have taken time to record three uniquely intimate versions of tracks from this album along with another classic number `Just Like Fred Astaire`, taken from their 1999 album Millionaires. This will be issued as `The Campfire EP` to tie in with their arrival on these shores for a brief Arena tour to promote the album.

We open with a kind of acoustic version of `Miss America` which examines that country’s damaged image through the prism of a beauty pageant. A stripped back offering with an absorbing string arrangement which is joined by a mournful melodica which intensifies the tone of cynicism and disappointment with this once great guiding nation. In `Recover` we have a song that is dedicated to the families of those lost to COVID-19 as was singer Tim Booth’s own father-in-law.

A mournful organ and cello lead the vocalist through this poignant tale celebrating the lives of those loved ones lost to this dreadful epidemic.

`Magic Bus` begins with some whistling and hand percussion before the vocals lead us through this slightly different but still very danceable track. An engaging listen which can be interpreted in so many ways lyrically. We enjoy a delightfully contrasting spin on this track from the high energy version shared on the ` All the Colours of You` album. We close out with the poetic love declaration that is `Just Like Fred Astaire` which is revamped with initially just an acoustic guitar, Tim Booth`s rich vocals and some complementary backing harmonies. It bursts into life with a steady drum beat and horns before ebbing and flowing until it almost runs out of energy.

The Campfire EP will be available exclusively on the band`s store and at merchandise desks on their forthcoming arena tour. A limited-edition release individually numbered and includes a QR code to download The Campfire videos. All of the tracks here are different to their original compositions but are just as enjoyable.  Singer Tim Booth may now be a sexagenarian but his vocal range and diversity is no different than when he was in his twenties. This extended play will be a worthy addition to your vast James collection.