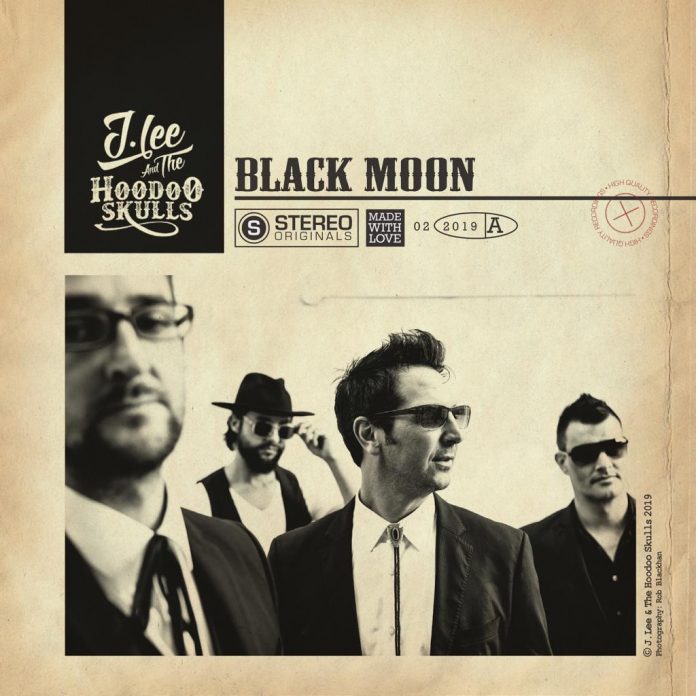 It’s brilliant when things evolve and become something you never expected, isn’t it? There’s no better feeling than beginning a creative journey that seems like its going to one place, only for it to go somewhere totally different.

This seems to have happened – at a guess – with “Black Moon”. J Lee got together with his Voodoo Skulls back in 2016 and the aim apparently was to “make a traditional rock n roll/blues album”. Laudable of course, and clearly the band are talented enough to do that if that’s what they’d chosen to do.

Except “Black Moon”, although rooted in those things, isn’t just some retro rehash. It’s actually far more interesting than that.

“2 Bit Lovers” is dirty, swampy, and there’s an undercurrent lurking throughout, this is actually bursting with a lust. “loving ain’t a crime” sings Lee, “people do it every day” and by the time the crunchy lead guitar solo has appeared as if from nowhere, you best believe that whatever Lee wants, he wants it now.

A feature of the record too, is that it is heavier than you might imagine. “Woman” has a solo that is pure hard rock, and whilst we aren’t totally in The Picturebooks type territory here, it’s not a million miles away.

Certainly there is something primal about “Save Me” and it reminds of Rival Sons at their very best, and if there’s been a glam rock sheen through many of them, then its right there on “Guilty Pleasure”, which hasn’t, in honesty, sounded guilty about anything, ever.

I am on much safer ground with “Breaking The Shakedown” which has a gloriously incessant hum, while “Take Me Higher” has a thumping groove, and it is to the records eternal credit that there is nothing approaching a ballad here.

The title track is built around the drums of Wayne Riches (a former drummer for Skin of Skunk Anansie fame) but has a taste of Sweet’s “Blockbuster” about it, while this faboulous half an hour ends with “Down” which rather brings us back full circle, because its drenched in lust and isn’t about to apologise.

So traditional blues? Kind of. Traditional rock n roll? Ish. But there’s a whole heap of other stuff here too, from glam rock to something grimy in the swamps. Whatever it is, though, this “Black Moon” shines brilliantly.

And I even got through this without mentioning J Lee is Shakin’ Stevens’ son. Nearly.