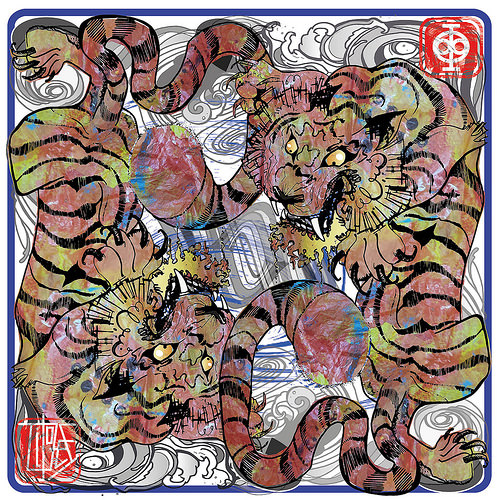 Always with a keen eye on genre names – MV it must be said adores the way music people try to describe the sound on their records – we were pleased to read that Iodine Sky call themselves “Active Rock.”

Rather more pertinent is this: in 2013 when the band first got together, they recorded a couple of singles with Brett Hestla (Creed, Dark New Day). Evidently he was impressed, because he flew Iodine Sky singer Aaron Ward over to the US to work on his solo album. Here Ward rubbed shoulders with the likes of Mark Tremonti.

Hestla is back twiddling the knobs on “Tides” which means that – and believe us this is meant as the biggest of compliments –  although they are natives of the city, Iodine Sky’s debut album is about as far removed from the archetypal Manchester sound as you can get.

Instead, it thunders in like its got urgent business to attend to, with the soaring “Broken Cross” which not only features the kind of massive guitar sound that the likes of Alter Bridge have made their own for years, but as well as that, there are few bands that use backing vocals quite as well as these boys and sound quite so mighty in doing it.

Nothing here really strays from that formula, “So Far Away” gets close to the growly-vocals-in-the-verse-clean-chorus template that is so prevalent in modern rock, but thankfully never goes fully down the path. “Down Over Me” does part balladry part bluster, but can’t quite resist a hulking great guitar hook to help things along and the title track is designed entirely to get 10,000 in some arena somewhere losing their minds.

Elsewhere, “Eyes Wide Open” is like a polished wrecking ball that just won’t be denied and “Rewind” adds some clever keyboard into the mix, while the harmonies on “Horizons” hint at a band who has much to offer and is very much in this for the long-haul.

And actually the last two songs here are the ones that really convince – for different reasons – that Iodine Sky are set for a career rather than being here today and gone tomorrow, “Summer Song” would, in years gone by, have been a staple of MTV, and the stripped back acoustic bonus track “Who Knows You” shows real talent and song writing ability.

Recently, bands like 48 Hours and Staring At The Sun have shown that British hard rock is finding its feet again and giving hope for the future. You can add Iodine Sky to that list too, because this is a highly promising debut.