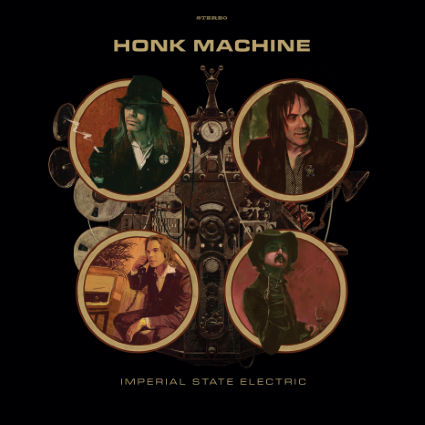 
Getting on for 20 years ago the two people that today make up what passes for MVM staff, went to Wolverhampton Civic Hall to watch the much missed Type O Negative. Two things really stick in the memory still about that evening in the mid-90s. There was the late Pete Steele’s suggestion that “if you are going to commit suicide then you should take someone else with you,” then there was the first support. Entombed were there first time that we’d ever seen a band that was approaching Death Metal. Crucial, though, to this review is the fact that their drummer, Nicke Andersson was by then the guitarist in one of this reviewers favourite bands ever, rock n roll monsters, The Hellacopters.

A sense of wanderlust was obviously with him even back then. Actually, the best way to sum Andersson up is quite simply this: Whatever he does it’s just about superb. The supergroup he was in with Ginger Wildheart, Supershit 666, yep, that was awesome too. So was the soul band he was formed The Solution, who nailed that genre as good as anyone.

He’s now the singer in, and one quarter of,  Imperial State Electric and the point in all this is quite simple, Andersson, rather like the aforementioned Wildhearts frontman is one of those blokes who likes to try a lot of things and can’t see why everyone’s not the same. Unlike Ginger, though, he doesn’t really make a bad record.

Even allowing for that, “Honk Machine” – the bands fourth album – is pretty special. And rather fantastically, over the course of its half an hour it seems to take all of Andersson’s post-Entombed ideas and chuck them all on one record for the very first time.

So it’s got soul on “Walk On By,” it sounds a bit like like later Hellacopters work on “Another Armageddon,” there’s a stab at 1960s rock n roll with “Lost In Losing You” which out sonics The Sonics, there’s even “Just Let Me Know,” which wouldn’t have been out of place on Springsteen’s “The River.”

Even here though, on a record that’s as good as this, there are a couple of moments of such jaw-dropping excellence as to set them apart. Here they are the no frills Stones meets Lynyrd Skynyrd freakout of opener “Let Me Throw Me Life Away” – with its key line of “I don’t do what I do to be pleasing you” which arguably sums up not just “Honk Machine” but entire career of the man singing it.

Even that track probably has to accept that it’s the closing song that takes the honours. “It Ain’t What You Think (It’s What You Do)” starts off like Led Zep, by the middle it sounds like the world’s best bar band, and by the end it’s crammed In two incredible guitar solos just for good measure.

There are more ideas on “Honk Machine” than most bands manage in a career. Hell, there are so many great songs here it almost feels like a double album. It’s not, it’s 11 songs and it’s half an hour or so long. It’s also approaching perfect.

Those that have followed the career of Nicke Andersson will not be surprised.