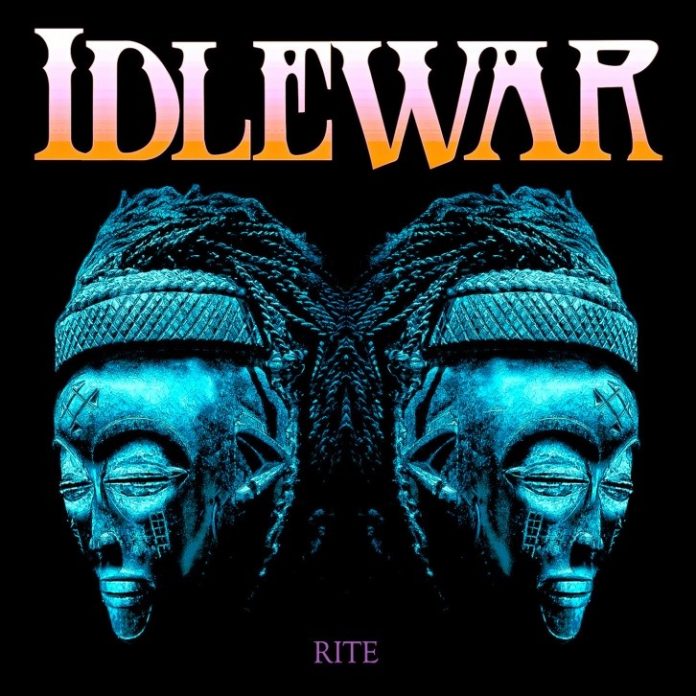 Before I start the review I shall digress a little. A strange phenomenon often occurs when I listen to some music for the first time and I also often get it at live shows; I find that some tracks or pieces of performance cause a tingle on the back of my neck and goosebumps on my arms (I read an article recently that suggested this might be down to ‘special’ brain activity, whatever that means).

A year or so ago I reviewed Idelwar’s previous album ‘Impulse’ and gave it a perfect 10/10. The album got some air time on Planet Rock and off the back of that, they were invited to play at Planet Rockstock last December. I saw two shows on the tour and they proved beyond any doubt that they had the on-stage chops to back up what they had put on record.

So a year on and the new album has arrived and I can honestly say that the sense of anticipation as I was about to play it was only matched in recent years by the last couple of Clutch albums. I’ve kept in touch with the Band since they came over and I know how much they have put into the recording process. This an important release for them, so the one over-riding fear you have at such times that the new music will somehow disappoint was very real as I pressed play. So, the million dollar question, what’s it like?

A diminishing heartbeat opens proceedings before ‘Sullen Moon’ explodes from the speakers, its slow bluesy funk hiding just how heavy this song is. The solo when it arrives is a thing of beauty, starting with some slow Billy Gibbons licks before moving to Slash territory for it’s climax. It’s a great opening track but it pales into insignificance when ‘Break’ kicks in, the first of my hair raising moments during playback. A Monster Magnet riff and a rhythm track to match get the vote as my favourite track. It gets right into the subconscious from the first listen. Listen for the piece two thirds of the way through the song when the music stops and the riff kicks back in. It sounds even louder and dirtier when it does and the next 30 seconds is possibly the heaviest thing I’ve heard Idlewar play – brilliant stuff and I reached for the repeat button as soon as it finished. In a way it’s a shame I did because that delayed track 3 from playing. This is the single ‘Keep Your Word’ and again it’s really heavy but still melodic and bordering on singalong. After such a full-on opening salvo, the start of ‘Sing Loud’ is a little more subdued but any thoughts that they’ve taken their foot off the pedal are dispelled when the chorus kicks in; with its Rage Against The Machine riffing it’s monstrous.

Drummer (and Producer) Pete Pagonis opens track 5 ‘Come To Save’ and this mid-tempo number has a swing and swagger like the best of Queens Of The Stone Age and ‘Hold On’ is more of the same. These two tracks have a bit more of an Alternative Rock feel about them and provide a little respite in the middle of the album. They still rock, just with a little less intensity. ‘Strain’ is in a similar vein but with an up-tempo riff that reminds me of Pearl Jam at their most abrasive.

These three songs almost lull the listener into a false sense of security as the next track ‘Panic’ is unbelievably heavy (more goosebumps!). With hints of Kyuss and Black Sabbath the track is immense. It’s a very close second for the best track here and some days it actually gets the vote hands down. The song has a real attitude and swagger in the way it sounds, it is just brilliant. ‘Caught’ has a thunderous Soundgarden feel to the music and James Blake delivers another of his impassioned vocal performances. The last minute of the song gets a Led Zeppelin riff and solo, full marks to Rick Graham for another top class job on this one. However they’re not finished yet as ‘Hang’ just demands maximum volume with a crunching riff that wouldn’t be out of place on a Mastodon album. The Coup de Grace is closer ‘You’re Gone’. It’s actually the closest they come to a slow song (I can’t use the word ballad for something this heavy) and features more blues based riffs and a somewhat low-key verse before the chorus delivers the fireworks. The song is so intense and powerful that the silence when it finishes seems loud in itself. The song is a perfect album closer and is sure to be a highlight on stage.

I’m aware that throughout this review I’ve name-checked many other bands. Please don’t think that the album is a collection of songs plagiarising other bands styles. Their influences are clear for all to hear but the overall sound is all Idlewar.  It’s fresh and contemporary whilst tipping its hat to the Bands that have gone before.

So to answer the initial question, this album is immense. It’s heavy in a way few rock albums are these days. This is due in no small part to the outstanding production and mixing, which is loud and aggressive but still manages to give space to both ends of the sonic spectrum. As for the musical performances; Pete Pagonis drums with a funk and swagger that suits the songs to a tee; James Blake’s singing goes from strength to strength and he is building a portfolio to suggest he is currently one of the best around at the moment. I am not qualified to comment on his bass playing but to my ears it all sounds great and he seems locked in solid with the drums.  Finally I would like to single out guitarist Rick Graham for a special mention. I feel that he has really opened up on this album and stamped his musical mark on the songs in a way that he didn’t previously. He plays with both economy and panache, none of the solos or riffs outstays their welcome but all hit the mark – top work.

So there it is, my record of the year. An album so heavy it should come with lifting instructions. Get a copy, turn it up as loud as possible and prepare for goosebumps.