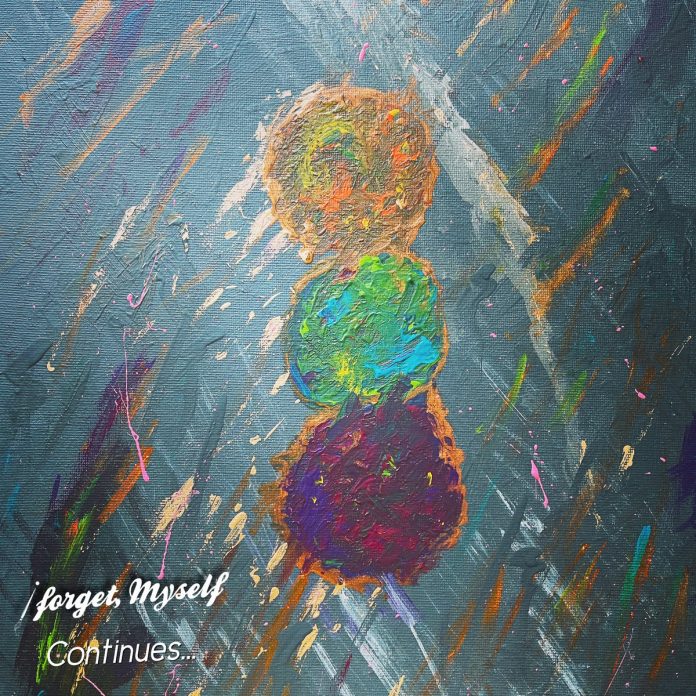 `I Forgot, Myself` is essentially the brainchild and alter ego of one man who is a musician, gamer, writer, and painter. As he relates on his social media site, who he is isn`t that important it`s what he does that is. South African born but currently residing in Hong Kong `I Forgot myself` has just released his second album titled `Continues…` which was written, performed, recorded, and produced by the artist.

The album opens with `Wilderness Fire` which is a real rock out with pounding drums and grinding guitar riffs and what sounds like a dreamy saxophone giving it a slight Psychedelic Furs texture. There`s a recurring lyric of “It started as a fire, that spread through the wilderness” and at times the vocals are nigh on screamed almost in a battle with the slashing guitar riffs. We have a slight break in the mayhem where the drum and guitar seem to mellow before returning to the fray with a sort of cry for help from the narrator right at the death. We have a throbbing pulsating offering with `Options` which had a sort of early Foo Fighters vibe with some quite reflective lyrics that seem to talk of moving on. I loved the last couple of lines “every traitor was once a friend; every broken heart can mend”

`The Bay` has a driving motion about it with a narration of weathering a storm that could be a metaphor for surviving all that life throws your way. The vocals almost seem double tracked and we enjoy a brief drum and guitar play off midway through before we`re propelled back on this potent journey. There`s another powerful trip with `Root of the Matter` that seems to be an acknowledgement that a relationship has run its course. There`s crashing guitar riffs, shrieked vocals but also more intricate and deftly shared chords and mellow vocals along route.

`Oceans Between Us` has that sort of seedy, sleazy glam feel about it, the sort of number that Faster Pussycat would drop. There`s some breathy vocals with that sort of distorted guitar riff and pounding drumbeat. A more sung at times come spoken word offering comes in the form of `It’s Not Me… It’s You` as you can imagine it`s a sort of vicious diatribe of it`s now or never in a relationship. I have to say the musical backdrop reminded me of U2`s `Even better Than The Real Thing` for some reason.

`All Of Us` was a quite complex piece with a lot going on. It sort of ebbs and flows with a variety of instruments and styles all kind of melded together. A difficult one to describe but a good listen. Again, we have a number about a one sided relationship with `Colour In Motion` with its thumping drums, shredding guitar chords and vocals telling of an all encompassing relationship, where one of the consorts can never be wrong.

`I Don’t Have All Day` seems to be about not worrying about what going on but just making the best of where you are and what you have all shared against a track that sprints along with pressing drumbeats and loud guitar riffs. The music pauses momentarily and then has a sort of belligerence about it for the last minute or so. I`d describe `It’s Time` as a three minute `1-2-3-4` punk rock belter, encouraging us to live for the moment rather than reflect on the past or worry too much about the future.

The album closes with `Get Something Started` which has almost tribal drumming, doom laden guitar riffs and vocals that are belted out and veer towards spoken word at times. Something slightly different to end on.

`Continues…` is a really enjoyable rock out with lyrics that question life and maybe conclude that it best to just live in the moment. It`s a tribute to I Forgot Myself that he has created this body of work where he played all the instruments, wrote, and sang the lyrics and then recorded and produced it. I`m sure there al lot more to come from this talented artist. If you enjoy bands like the Foo Fighters and Queens Of The Stone Age, i`m sure you`ll enjoy this.