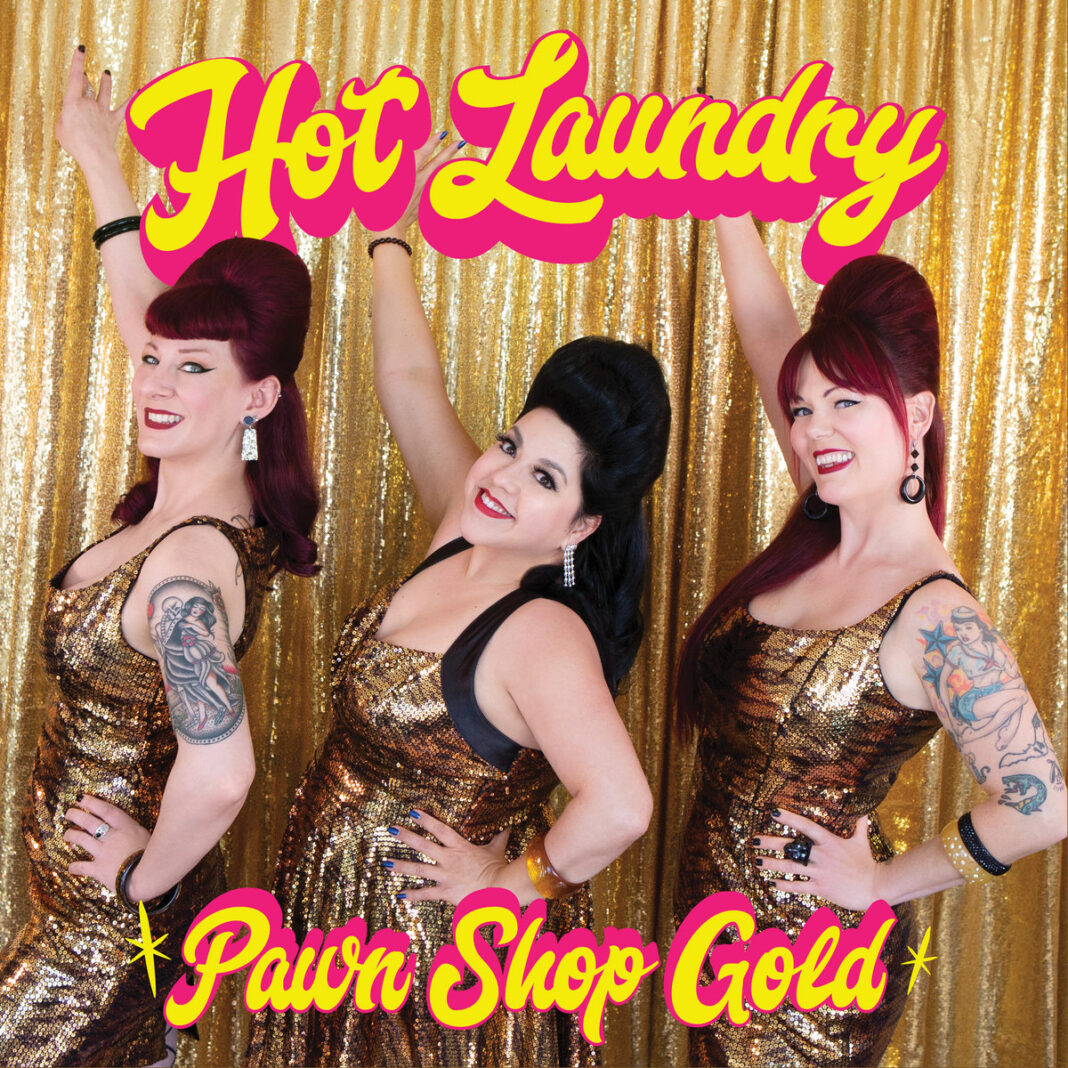 Back last spring an email arrived into the MV inbox from Hot Laundry singer/guitarist Grady. It had an EP enclosed that was much fun. And it kind of sounded filthy too. Basically, it distilled rock n roll until only the good bits were left.

The San Francisco band – only the three ladies ever appear in the band shots but there’s six of them – then followed it up with “Everyday” earlier this year. A kind of pre-cursor for this, given that three of its four tunes appear here too, was more of the same. But better.

Which brings us to “Pawn Shop Gold”.  It is like being transported back in time. It’s brilliant.

“Everyday” is pure sugar rush. Like a Skittles bender. It celebrates rock n roll. That’s it. “We can begin to never hurt, and never fear again”, is the type of escapism that has always existed. Like, miserable songs are ace. But there’s some bands that are just in it for kicks. Here’s one.

Take Voodoo Queen. A duet. Think something off the Grease soundtrack if it was full of Sonics-esque Garage Punk and as many Jim Steinman-isms as you can chuck into two minutes 20 seconds. They are going to “shake that thing” apparently. I am not asking what, I suspect it’d scare me. Or make me blush.

“Over You” is another from the recent EP, and god help the fella that dumped any of them. “The Dance” is another of the ones that you’ve heard before. Sugar sweet harmony and a pole dancer’s act. That’s basically the thing. The Beach Boys, on one hand, something all together different getting around on the other.

With a full length album to do this time, they’ve widened the sound. “Supper’s On The Stove” is blues in the same way that Jon Spencer is blues, and the soul they promise on their Bandcamp profile is right to the fore on “Work It”.

Mostly though, this is full of stuff like “It’s Alright”, which sounds like it must be a cover, but isn’t. Writing something so timeless is a gift. And on a record where the vocals and the harmonies matter so much, lets take a moment to praise Grady Hord’s guitar throughout. The solos are stunning, but never better than “Over The Line” which is just so good. The drums of Arun Bhalla propel the album, giving it a primal urge. One the lyrics of “Baby Come On” match. “I know what you want……you’d better get in line.” Crikey.

But “Fool For Your Love” almost in a way bookends the album by proving that it’s all just good, clean fun. The girl groups from the 50s, the ones that provided the soundtracks to the drag races on films like American Graffiti are clear influences here and there’s something sweet and innocent about this.

Indeed, its best to think of Hot Laundry like this. So timeless, innocent and sweet does their music sound that you could cheerfully imagine them at a chaperoned school disco, all prim and proper. That said, they’d almost certainly be the ones who spiked the punch when no-one was looking.

This is pretty much solid gold.