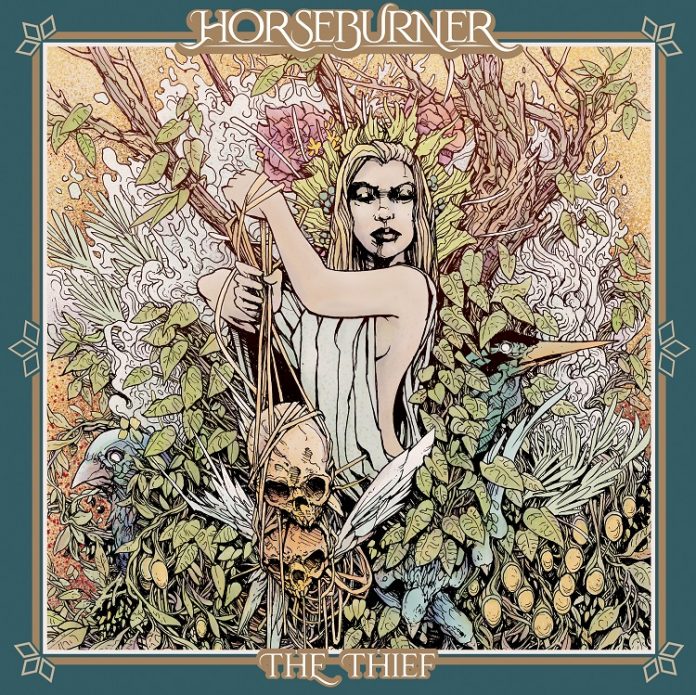 I always admire a band who takes the Billie Piper approach, that is to say, “because we want to” in answer to any question about why they make music.

Tucked away in the Appalachian Mountains are Horseburner, who not withstanding a terrible name, have taken a DIY approach to what people cleverer than me term as stoner and doom. There’s a bit more to this sound, but we’ll go with it, for the ease of a hook.

“The Thief” is their first record for Ripple, which is a good thing, because now they have the support of a label behind them that is rather adept at polishing these kinds of gems up and giving them to the rest of the world.

“The Thief” is their second record, but the band themselves have been making music up in the hills for a decade, and it is instructive perhaps, to look at the list of bands with they’ve appeared with. Torche, Weedeater, Goatwhore, Obituary, Corrosion of Conformity, The Obsessed, Karma to Burn and Bell Witch.

Now, in honesty, there is a bit of all that in the nine songs here – which is why I would be hesitant to paint them with the doom brush and not go back for a second coat, as it were.

There are nine tracks here. Three of them instrumentals. The title track and its quieter, almost prog brethren, begins and ends the record, but it is telling too that “The Thief” itself merges into “A Joyless King”, and that really is indicative of a record where it is tough sometimes to tell where one song ends and the other begins.

Obviously it is designed that way, and there is something crushing about the drums of singer Adam Nohe, but this, more than anything is about the guitar tone that Jack Thomas and Zach Kaufman manage to achieve.

“A Drowning Bird” begins like Crowbar, and there is a maelstrom in this heavy, thick sludge that really does suggest a NOLA band. There is something oppressive, southern if you like, about all this.

There is something just a little different about them, though, there really is. Whether it’s the prog touches on “A Fisherman’s Vow” or the desire of “Hand Of Gold Man Of Stone” to start a moshipit, before doing something a bit more fragile, before settling into a proper metal groove, there is no pinning this down.

Part of this is that each song – and it is noticeable that these are songs in a way that some of their contemporaries don’t manage – is a journey. Of the none-instrumentals “….Stone” is the shortest at over five minutes. What this means is that “The Oak” can start with an ominous tone, then swap to something more harmonic altogether, while there is a rattle, a rumble, but also a slow building class about “Fathoms”, and trust me, if you fancy a headbang here, you can have one and no mistake.

“The Thief” is many things, but what it is more than anything is interesting and compelling, in a way that many of the boring band that think all you have to do to write doom metal is have a recycled Sabbath Riff and lyrics about Satan.

Instead, this is beguiling, and although it’ll take a couple of listens to properly hit home, it is worth your time.