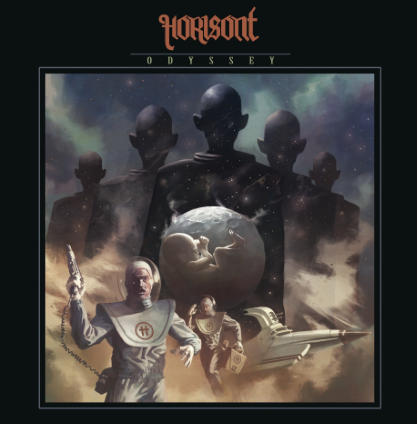 There’s a bunch of great bands who emerged a few years ago mostly from Scandinavia – with the odd hat tipped in the direction of Germany – who decided to just sound like they were making records from 1973. They were all ace. Graveyard, Kadavar, and Horisont amongst them. And that was just dandy.

But what do you do if you feel a little constrained by this sound? Well in the case of Horisont, on “Odyssey” you create something magical. The opening title track is a quite incredible piece of music. Imagine if you will Deep Purple, Iron Maiden and Jethro Tull jamming on a song. Then imagine, right in the middle someone chucked the bass bit from the start of Bon Jovi’s “Livin’ On Prayer.” That’d be amazing, right? Well someone has and it’s right here. The other-worldly qualities it possesses are best summed up by its chorus line: “To seek the answers beyond the stars somewhere.”

Indeed, it’d be tempting to call “Odyssey” a concept album, except the band say it isn’t one. They reckon instead it’s a “space saga” so we’ll allow them that. What is absolutely cast iron certain about the whole thing is that is fabulously ambitious.

That’s possibly down to the fact that “Odyssey” is the first Horisont record to feature Tom Sutton. The Aussie moved to Northern Europe because he liked the music (absolutely true) and as well as being the former bass player in the loons that are Church Of Misery, he is currently the man behind Order Of Israfel and those boys don’t stick to boundaries either.

He’s perhaps brought that risk taking to Horisont, because while “Break The Living” drips with early Maiden like intent, and “Bad News” is driving somewhere fast with Judas Priest on the car stereo, it’s just as likely the slow, swirling almost bluesy “The Night Stalker” will be coming into view and the acoustic strum of “Flying” adds yet another texture.

Texture is what this record is all about, “Beyond The Sun” and “Back On The Street” both have incredible melody and guitar sections which brings to mind Thin Lizzy, while “Red Light” is all carefree speed and letting your hair down.

And a record that begins with an epic elects to conclude with another rather brilliant one. “Timmarna” is one of a clutch of songs here that are sung in their native tongue, but this is the best of the lot, given that it fleshes out some Doors-like ideas that have been hinted at throughout.

If awards were given for ambition then “Odyssey” would be the album the year. As it is it’ll have to settle for bring almost perfect.