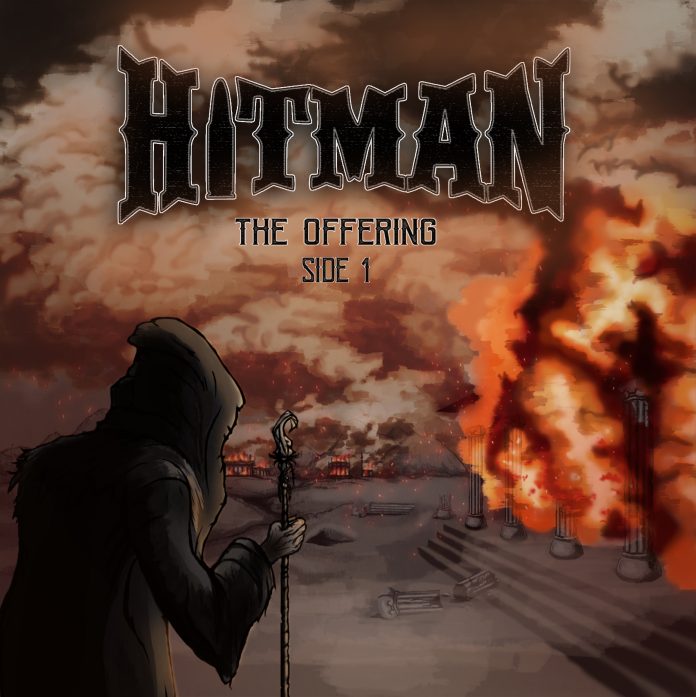 It’s interesting, that so much stuff comes into the MV inbox that I find myself making snap judgements on bands.

Like the other day there was something calling itself “spicy pop”. Deleted. Same story for anything with “blackened” or “post hardcore” and myriad other genres that people make up.

This, though was different. Nova Scotia’s Hitman got on the “maybe” pile, based on two things: 1) the cover – the grim reaper looking back on some burning building and 2) Rob Halford likes them.

From this I deduced, that what I was going to be dealing with was four tracks of Priest style NWOBHM which is ace as far as I am concerned.

I was half right. It is ace – good Lord it is magnificent. But Hitman got on the “definitely reviewing this, because it rules” pile, because they deal in whiskey soaked, groovy stuff that is just as rock n roll as their awesome countrymen Monster Truck.

“Curtain Call” is two minutes of glorious noise that sounds like Orange Goblin jamming with Corrosion Of Conformity, and you gotta say, that would be a great idea.

“Well, I was a good man” sneers singer Jordan Rose, in a way that suggests he’s looking to be anything but. However, by the time you’ve had chance to digest this, they are straight into the stunning “Under The Weight” – a song so good that it would have managed to make “Cowboys From Hell” even better, but also a song with twin guitar melody that Thin Lizzy would steal if they needed to (which makes this song very, very good to avoid doubt).

Indeed, as much as Rose leads this band with a primal roar, this EP belongs to Corey Norman’s guitar. He finds a filthy lead on “Nero” and “Enchanted Wizard” is built around something of a Tony Iommi freak out.

Sabbath have clearly influenced this, but the fact you can pick out their heroes is not an issue. This is four guys playing the music they love and doing it magnificently.

This is a gem. Hitman kill it on these four cuts. Part two is due next year and you can count me in.