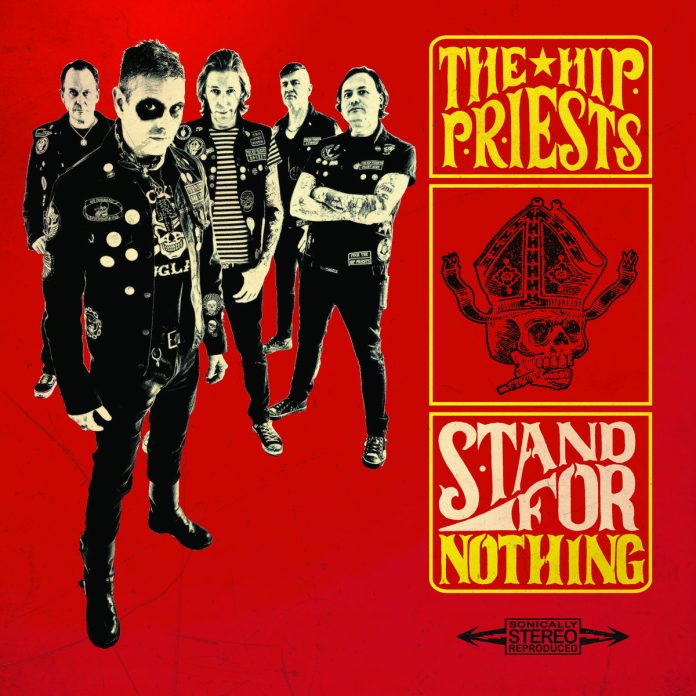 It might not always seem it, but I take great care on the intros to these album reviews. They are not just a random set of the things that are pissing me off that week, trips down memory lane, jokes about my dad or muses on whichever girl it is who doesn’t like me that day so I get a text going “oh I see I am famous again…. :-)”

Ok, they are those things, but still, I love writing them.

Sometimes, though, a problem presents itself. You come across an album so good – no, so incredible – that with each song that goes by, you think: “yeah that’s the one.”

So, damn you The Hip Priests, you glorious, glorious bastards, because my thought process for “Stand For Nothing” kind of went like this.

“Welcome To Shit Island” comes on: I start mentally preparing an intro about how the rise to prominence of,  or the way the BBC gives air time to, that wanker Yaxley-Lennon, or the fact that UKIP is fielding a candidate in the Euro elections who thinks the age of consent “depends on the child”, or the sheer existence of Nigel Farage proves that THP are right.  This island has gone to hell, indeed .

Then “Deja FU” – and yes, it stands for what you think it does – comes on a bit later and I’ve ripped that up for a discussion on the line in the second verse of “social fucking media, idiot fucking pricks” has nailed modern life.

That’s before the last song, “Rock N Roll Leper”. And you want to call out the mates at work who spent five years telling you your website was “shit” until they found out you could get free tickets for a couple of indie gigs. Then all of a sudden…….

The fact is, though, that “Stand for Nothing” is all of those things. It’s loud, snotty, it’s nihilistic and to paraphrase the words of Billy Bragg, “if you’ve got a blacklist The Hip Priests wanna be on it.”

The sound of it is all important. Its punk, but it’s not the punk of the Pistols or The Clash, it’s as trashy as Hanoi Rocks, it’s as catchy as Backyard Babies, and its as angry and fast as Zeke, and that, to be clear, means it rules.

The title track gets its fists in the air before slamming you to the wall,  “are you gonna march or fucking crawl?” shouts Nathan Von Cruz, and do not doubt it is a threat, not a request from the front man, here.

But the best thing about The Hip Priests, is simple. Strip it all away and this is escapism. This is rock n roll for those who have the shit day jobs, the lives they wish were different and dream they were in a rock n roll band. These are the boys that did it. These are our heroes. They are all of us.

“Cheers To Me” (“gonna get so wasted, fucking annihilated”) is the Friday night you don’t have, but the thing is – probably – THP don’t either. That’s the point.

Which is why “Losers Of The Faith” is glam rock for those that gave up caring years ago,  “Social Hand Grenade” – think Motorhead on (even more) speed – can have the chorus “can’t get paid, can’t get laid….” And you will be singing it within seconds (and thinking ‘one of those things is true’, sadly…..) and why if I was going to release an autobiography I’d call it “I just got hate and STD’s (and urmmm, one of those things is true, sadly….)  and the bass “From Here To Adversity” can thunder in the way it does. It’s their rage, its yours too.

“Last Train Wrecks” (first line: “smoking cigarettes in the Oslo snow, I want a beer, but he wants blow……) casts them as the last gang in town, but I am willing to bet any money you like that once the gig is over on Saturday night, these boys are home to their wives and cutting the lawn on Sunday morning.

Where THP differ from most of their peers – aside from being better – is that they have fully formed songs, not just 90 second freak outs. “How Do You Get Off (On Getting Me Down”) is almost a ballad, albeit a ballad with the line “I got my hate on a chain, like a suffragette”).

Rock n roll almost never seem like it has any danger in it anymore. Bands these days often sound like they’d fill in a risk assessment form before doing a guitar solo. The Hip Priests on the other hand, come on like they haven’t charged out of the East Midlands to be told what to do, by anyone.

It probably wasn’t supposed to be, and you probably wouldn’t want to play it to your nan (unless shes the coolest, most hate filled nan ever), but there’s a very real chance that “Stand For Nothing” will end up as the best record of 2019.