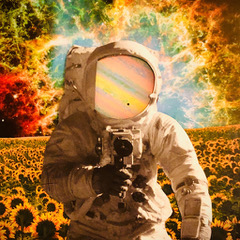 `Golden Dirt` is a forty minutes of brand new material from Hello Cosmos, what songwriter and bass player Ben Robinson has described as a mixtape. It finds them breaking from their traditional psych/punk territory and experimenting further with looser arrangements, electronic and hip-hop inspired sounds, spoken-word, and special guests. A collaboration with San Francisco-based producer The Olchemist, the recordings were shared between him and Ben during the lockdowns of last year.

The album opens with `From The Ground Up` and it has that sort of languid laid back musical vibe that Gomez seemed to have off to a tee. Atop this musical platform we have a more or less spoken word stream of consciousness where random thoughts are shared. There`s a kind of light drum and bass texture to `Hard Enough To Start With` which seems to be an expletive ridden diatribe on the frustrations of how life must have felt for the singer at the time.

`Summer Will Come` has a similar feel to the last track but maybe has a slightly more positive message. We have so much to enjoy on `Loud Is Beautiful` a track that encourages the return to live music and more social interaction. There are harmonic backing melodies and a dazzling sax solo from Elara (aka Claire Crowther), whilst Chantelle DeSchutter AKA ‘Telle’ provides the Hip-Hop tinged vocal touches.

`All The Trimmings` is a kind of brief musical sorbet, a kind of palate cleanser between tracks. I felt `Dark Nation` which features Gaza Princess on vocals and Ray Sapiens on backing vocals was a pretty edgy tense offering. It could almost have been this outfits answer to Basement Jaxx`s `Where`s Your Head At`

I must admit I had to google what `Metaverse` meant and it’s a combination of multiple elements of technology, including virtual reality, augmented reality, and video where users “live” within a digital universe, if that helps. To me it felt like a sort of electro techno rave anthem with numerous pearls of wisdom shared throughout but the line that stuck with me was “Be defined by your actions and not your opinions”. Ben`s brother played drums on this number. It`s a little difficult to pigeonhole `The Only Way Out Is Through` which seems to encompass a variety of musical genres touching on rock, rave, electronica, dance, and trance along this very eclectic but captivating journey. It becomes quite hypnotic and enjoys a repeated refrain of “rest recover go again” towards its conclusion.

`We Are Greater` is a little out there. It sort of grows and evolves but only slightly and retains an underplayed intensity during the course of its life. Georgina Buchanan adds her dreamy vocals intermittently throughout. The last couple of minutes becomes a dreamlike aural soundscape. There`s a kind of reggae tinged musical platform on `Live Music, it’s Who We Are` that allows a vocable thought purge to be shared.

The album or mixtape closes out with title track `Golden Dirt` which features Elara on vocals, and sax and Telle on backing vocals. Another composition that is quite illusory where you can find yourself drifting away from the everyday trails and tribulations of real life.

This album was written as a means of expressing the frustrations of vocalist, musician, and promoter Ben Robinson during the lockdowns of the last year. I`m sure for him it was cleansing, purging and cathartic. At times it can be a slightly challenging but overall, a rewarding listen. Like any favourite mixtape that you have this is the sort of release that you`ll find yourself dipping in and out of as the mood takes you.