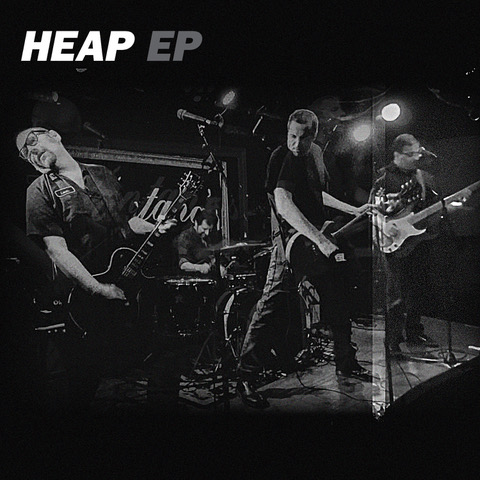 You know when people say “you can’t judge a book by its cover” and all that? We all know its rubbish, right?

Example number one million of that is this from Heap. Look at the cover. You know what they sound like. Earthy, blue collar, unflashy but in a good way. Blokes who want to play rock n roll, because its all they want to do. No, actually, make that all they need to do.

Led by Tim Heap, the five piece have been making records periodically since mid-90s, and earning plaudits along the way from the likes of MV fave, Jerry Lehane of The Dogmatics. This EP is produced by Eric “Roscoe” Ambel, (Steve Earle, The Bottle Rockets), and that’s actually not a bad place to start. It’s got the same earthy vibe, like it’s a sound that’s been hewn from the red clay rather than the concrete of NYC.

As he puts it on “No Mas” (the words Roberto Duran said to Sugar Ray Leonard in their big fight) Heap has “never been the right amount of drunk…..or punk”) but anyone who loves bands like Marah has a new hero, frankly.

“Renting” is like The Replacements but on a bigger scale, this is not middle America, rather it’s the metropolis writ large, and the last one, the brilliant, tongue in cheek “You Remind Me Of Me”, is just the cure for those who haven’t quite got used to the fact that Dan Baird And Homemade Sin aren’t touring anymore.

Which brings us back to where we came in. That cover? It reminded me of those nights where you saw a band, whether it was Baird, or The Drive-By Truckers, even Southside Johnny, where it wasn’t about image. It was hot, sweaty and the music was all that mattered. And you know what? I reckon I wasn’t far wide of the mark.

Whatever, there’s a Heap of good stuff here.