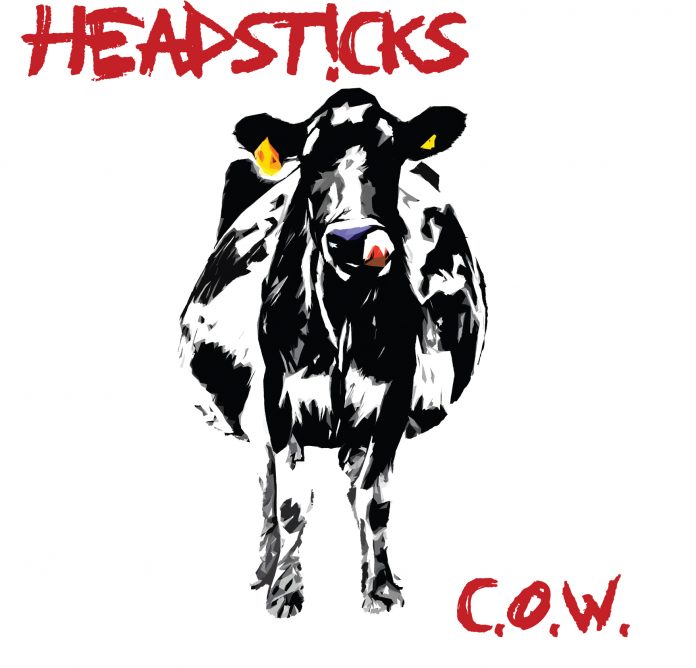 Headsticks sent a press pack with “C.O.W”. A selection of press quotes about them, collected over the years. Oner of them is one of mine. Right above one from legendary Attila The Stockbroker, printed in The Morning Star.

I am proud to be in exalted company, and there’s a couple of things about this that are important. First, the politics – a look at my personal twitter feed shows a bio that says “Anti-tory but no longer Labour” – its easy to be on board, frankly. Then there’s the date and place my review was written. Buckley Tivoli on 29th June 2018. The band were opening for The Wildhearts. As I never miss a chance to say, Ginger and the fellas are my favourite band and it was the first time I’d seen them for a couple of years at that point. To be honest, it would have to have been a special band for me to even register that there was a support, but goodness, Headsticks were impressive.

Which brings us to “C.O.W”  – and lets be honest here – if you are band with a social conscience (note not politics – we’ll get to that) then there has been a lot to digest over the last three years or so.

And it all comes out in this stunning record, frankly.

“Red Is The Colour” begins with a punk rock riff, and look, I am going to mention Ferocious Dog at some point so I might as well do it now, because you can imagine Ken, Dan and the lads singing this. And as I am going to mention The Levellers at some point too, I’ll get them out of the way with “Peace And Quiet”. The thing is, though, that even if there are obvious touchstones, then they don’t sound like either. For one thing there’s no violin, and for another Andrew Tranter has a distinctive vocal style coupled with lyrics that are very much his own.

I’ve always been a sucker for a frontman singing in his own accent, and Tranter does. It so happens that I share a place of birth with the Headsticks hometown, this is more Bucknall than Brighton or more Normacot than Newark, as it were (niche Stoke On Trent reference, for you there).

I don’t live in Stoke on Trent anymore (although suffer/love the city’s football team in equal measure) and its tempting to think of “Miles And Miles” and the likes as being hewn from the clay.

But the fact is these songs being to everyone. Every working class person in this land can feel the anger and helplessness that flows through every word on “Tear For Yesterday.”

A folk band, when you strip it all away, they do just that on the acoustic “Tyger, Tyger”, and “This Ain’t Politics” could have come off Billy Bragg’s middle period albums. “When you see injustice, shouldn’t you stand up and fight?” it questions, as it feels disconnected from the political classes.

“Naked” though, is a proper big rocker. Heavier than most of their peers, and it takes fakeers to task quite brilliantly. The bass groove on the more pop “Red Sky” is impressive, while if “Burn” sounded any more 80s, then I’d be about 14 trying to get Dawn Hughes to dance with me at the school disco.

They save the best two for last, though. “Speak Out” has a metal riff, but it crushes inertia over three minutes. Which brings us to “Sing Danny Boy” – the final track here, is quite incredible. Spoken word, delivered with all the emotion of a Shakespearean soliloquy. It discusses domestic violence with a pain that surely has to be real? It is one of the most harrowing pieces (note, not songs) that I have ever heard, and makes me grateful for the family life we’ve always had.

If that’s the best – and the rawest thing you’ll experience – then that shouldn’t detract from the quality of the fabulous kaleidoscope that is the rest of “C.O.W”. One of the best, most original records from a British band so far this year.