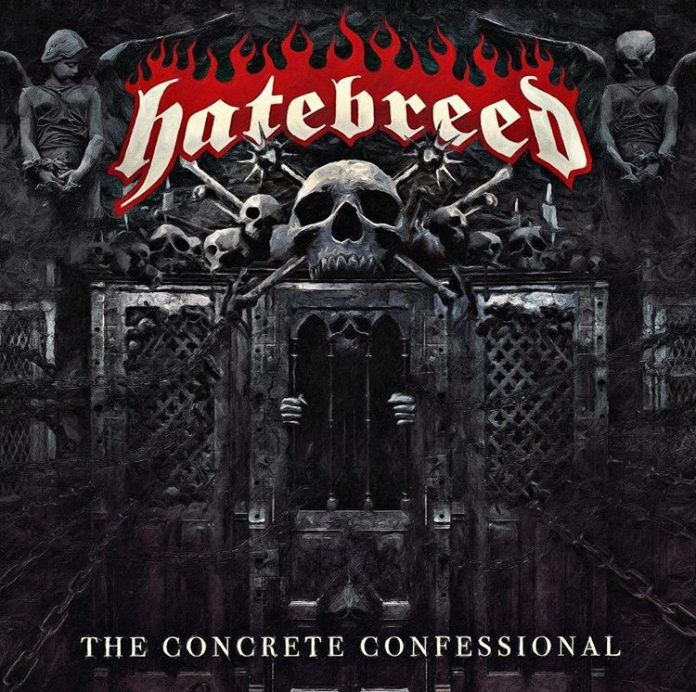 The soundtrack for the modern world?

You only need to put on the news to see that it’s not nice out there. There was a time, of course, that musicians would reflect this. But in 2016, with X Factor celebrating the talentless and making them famous. Where once the answer was blowing in the wind, these days music doesn’t have the answer, it seems.

Which is precisely why you need Hatebreed.

The Connecticut mob are not without controversy, but for getting on for 20 years they have amounted to metal’s conscience – as well as stirring up the best circle pits this side of Slayer.

Mention of Kerry King’s boys is pertinent too, not just because Hatebreed cover their songs live, not just because Slayer have been misunderstood too over the years, but also because as Hatebreed have travelled along their journey, they are less the hardcore band they used to be and more a damn fine thrash band.

“The Concrete Confessional” begins with “A.D” and its wonderful anger is channelled through the prism of a modern thrash metal song, with fine lead breaks from Wayne Lozniak and Frank Novinec. The other 12 songs don’t really stray too far from this maelstrom – and indeed those looking for blight and shade can basically look elsewhere. Those, on the other hand, who want to listen to the sound of their own inner rage will find much to enjoy.

“Looking Down The Barrel Of Today” combines gang vocals with an enormous breakdown, while “Seven Enemies” and “From Grace We’ve Fallen” work on the principle that if you aim at enough targets and with a big enough wall of sound then some of those targets get hit.

Whilst there are no bad songs here, there a couple of magnificent ones. “Us Against Us” is proof positive that no one writes better sloganeering lyrics than Jamey Jasta. There’s nothing here that couldn’t be used on a t-shirt at a moment’s notice. “Remember When”, for example, is nothing more than a white hot pit of seething anger is a case in point.

Best of all on this magnificent collection is “Slaughtered In Their Dreams”, which is to minutes and 15 seconds that does more than most manage on an album, although “The Apex Within” – perhaps the most punk rock infused thing on offer – isn’t far behind, and contains the single best mission statement amongst the many here: “Wolves,” it growls “don’t lose sleep, over the cries of sheep.”

Arguably the single greatest critics ever, Beavis And Butthead, used to boil music down to three things. Songs were “cool” or “sucked” or made you want to “break stuff”.” “The Concrete Confessional” is definitely the former and will help you do the third. Really that’s all you need to know.

That, and the fact that it’s a brilliant.