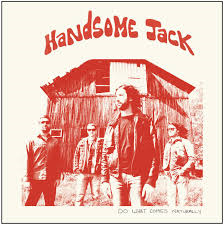 According to part-time rocker and full-time self promoter Gene Simmons “rock is dead”. The legendary Kiss bassist also pointed out that it’s not been a quick death either. A slow painful demise over the past decade. He blames record companies, file-sharing, downloads etc etc.

Whether he is right or not is a mute point, it’s certainly not a thought process that Maximum Volume subscribes to. One thing for sure is that he has clearly not heard New York’s garage rock/blues supremo’s Handsome Jack. If he had he may well of held off making such a statement. That said if HJ are anything to go by then rock will have to go back to it’s past to secure a bright future.

If you wished bands of today sounded like the bands of your yesterdays then it’s time to embrace this band for make no mistake this album could have easily been made in the late 1960’s/early 1970’s. The fact it wasn’t is purely down to timing, as everything is here for a classic album of that era.

Opener “Echoes” is a fine example of the retro-sound. It’s a slow burning bluesy stomp through the wasteland of modern America. “Creepin’” follows on it’s heels and  owes a debt to Van Morrison that has already been repaid.

There is a constant groove that provides the heartbeat of their music that gives them a streak or two of originality, which places them above the standard copyists that currently occupy venues across the UK & USA.

“Leave It All Behind” showcases the band’s smoother sound.  “Dead Tracks” and “Ropes and Chains” are top drawer numbers that would thrive in the live environment.

What the band’s music lacks in fiery rock energy it makes up for in pure grit and belief in what they are doing is the way it should be done.  Trying to sound like you come from a different era is fraught with danger and many bands have fallen through creaky floors due not treading carefully.  Fortunately HJ are just doing what comes naturally.

Listen to the album at http://classicrock.teamrock.com/news/2014-09-17/exclusive-handsome-jack-album-stream