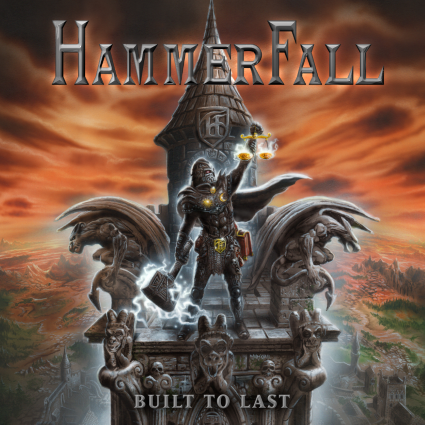 Built to last and forged in metal. Horns up.

Like a film that gives its plot away too soon, or a whodunit that tells you who did it early in the piece, “Built To Last” gives all its secrets away inside its first 73 seconds.

For that is precisely how long it takes Hammerfall to get from the opening riff to the first chorus of “Bring It!” the strident opening salvo in this particular metal battle. In that time we’ve had a guitar lick that is equal parts early Motley Crue, early Maiden, and Judas Priest, well at any point of their career, really. Furthermore, we’ve had a defence of M.E.T.A.L with the attendant idea that we have to fight for the right to rock (this cheerfully rhymes “crusade” with “blade” too) and there’s a fists in the air hook while we are about it.

Which basically means all is present and correct in the world of Hammerfall. Let’s be totally honest you don’t want the veteran Swedes to do anything else. You haven’t come here for an introspective shoegaze or to mourn some lost love that’s going out with your mate and blanks you on the street. You’ve come here for leather, swords, bombast, dragons and violence – and that’s what you get.

The irony is bands like Hammerfall are what people who don’t like metal think all metal sounds like. It is gloriously – and knowingly – OTT. For goodness sake “Hammer High” is supposed to be ludicrous, surely? “The Sacred Vow” is simply an armour plated Manowar homage (spoiler alert: the sacred vow here is to fight for metal) while “Dethrone And Defy” is a million miles an hour, soaring and brilliant (spoiler alert: this one is about dragons forged in fire. And swords. With added wizards of steel. No, we are not making this up.)

“Twilight Princess” adds a proggy element, some flute and a Led Zep kind of opening and the fact it goes two minutes before laying it on thick, probably counts as stripped back on a record that doesn’t understand the meaning of the concept of turning down from 11. “Stormbreaker” on the other hand, rumbles like thunder and builds to a hurricane all in the space of five gleeful minutes (spoiler alert: this one involves a dragon attack in its first line) and the title track seethes with something beyond passion (betcha can’t work out what is built to last?)

And so it goes, “The Star Of Home” is more of the same, and “New Breed” starts with a mighty guitar wall and builds from there, laying waste to infidels along the way, and if “Second To None”, which concludes the issue sees them returning from the dark side, they’ve met with Beelzebub and decided winning with metal is the way forward. That’s all good then, then.  Oh, by the way, this is a ballad.

The point in all of this is as absolutely plain as the studded belt on your leather trousers. It’s as easy as you like to take the piss out of Hammerfall and bands like them, but there is one undeniable truth. They are brilliant at and “Built To Last” is big, bombastic, dumb fun.