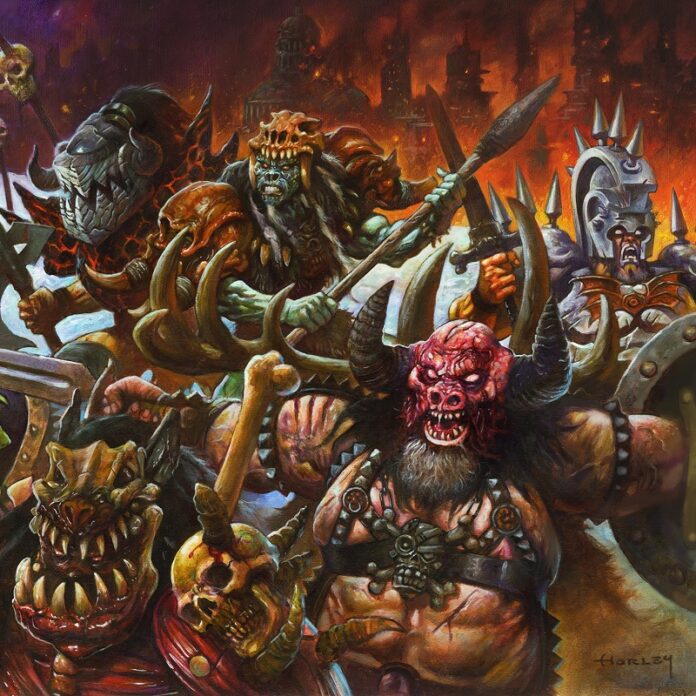 Back in 1990, we spent our pocket money on any record that we fancied based on the reviews in Kerrang and Raw. So it was one morning we’d gone to Birmingham on the bus and I bought a cassette called “Scumdogs Of The Universe”. The band was GWAR. I always liked the fact they had capitals, as it was like they were crushing all beneath them.

That was, if I recall, their second record. “The New Dark Ages” is their 15th. It presents a dichotomy because  whilst clearly the Virginia mob aren’t a conventional band – never mind the costumes, they’ve had about 14,000 members or something and their only current original member was the bass player, pissed off for a couple of decades (and I like the thought that he did a proper job while this happened) and came back as the singer – what they do, as always is rather more straight up metal than you’d expect.

That’s always been the case, and whilst they wrap this up in a graphic novel where they battle their doppelgangers in an intergalactic battle, it doesn’t matter whether you buy into this or couldn’t give two shits if they want to play Warhammer (I’ll let you guess where I stand), because “The New Dark Ages” rules as a simple rock album.

The near title track is wonderful. A state of the union, in which it finds that we puny earthlings deserve all we get. The breakdown bit is sensational. “You stupid motherfuckers get your hands up in the air, your world has gone to shit and we don’t fucking care” notes  Berserker Blóthar cheerfully (and for full pop effect he does this with autotuned vocals.

“Blood Libel” does thrash, it does rock n roll, and it excoriates religion in about four minutes – and brother, GWAR are merely getting warmed up.

This is a record with plenty to say. “Beserker Mode” nods to their past and is rawer than the others, and somewhere Tommy Victor is furious that they’ve burned Prong down to the ground (I imagine that’s what GWAR do?) and stolen his riffs. Probably salted the earth too.

Every so often they pull one out that sounds like a soundtrack to your nightmares, “Unto The Breach” is one. And every so often they pull one out that makes you realise that they don’t see the world the way us normal people do, “Completely Fucked” will do if you want to shine a spotlight on it. It has all the urgency and melody of a Twisted Sister song (and Dee Snider could actually be singing the thing) but to my knowledge, they never had a song where you find blood in your piss.

“The Cutter” is brilliant. Moshpit ready, and then some. And Lzzy Hale turns up on it, “Rise Again” begins with some church organ and passes as the ballad, or the arena rocker. Good lord, does it shake them foundations, baby.

The maelstrom of nastiness that is “The Beast Will Eat Itself” sees things take a dark turn, likewise “Venom Of The Platypus” is all very well, but “Ratcatcher” is what we came here for. A glam rocker that would make Hellacopters blush, cowbell rockets along, and its got this hook: “I got your children in my basement, they’re trying to get out. Policeman searching my neighbourhood, I hope they don’t find out”. You either love this or you don’t. And don’t think that GWAR give a toss.

“Bored To Death” keeps up the good time nihilism, but a mark of the ambition here is the closing 16 minute prog rocker. A three parter, The Death Whistle Suite is sprawling, and like looking into the very depths.

It’s one of a few moments on this where you think GWAR have managed, for about the millionth time in their lives, to outfox you, outflank you and do the unexpected. They are a brilliant band, and this is a brilliant album.

Unless of course you don’t get this, and don’t get wHy grown men dress as aliens and yell “rock me Amadeus” for no reason that I can fathom (which they do in “Starving Gods” the middle of the opera). The thing is, though, with GWAR its ever been thus. It’s 10/10 or 0/10. No grey areas.

So I am giving this

Rating 9/10 (just to be hypocritical)