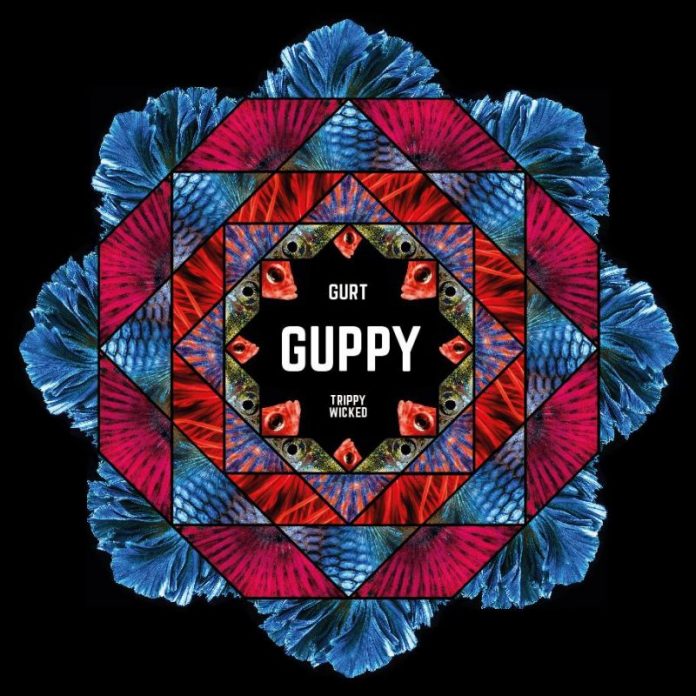 Split cd’s, it seems to MV anyway, are perfect.

There are those of us with attention spans that don’t allow for chin stroking dissection, there are those of us that like to flit from one thing to another and yes, there’s saddos amongst us that still like making compilations. The beauty of the split is that we don’t need to, someone already has.

This couple always looked a decent bet for one. It might not immediately be obvious who Guppy are, but its London sludgers Gurt and the more stoner rock crew Trippy Wicked. the bands have been close friends for many years (as well as now sharing a drummer in Bill Jacobs) so entering the studio together to create GUPPY was a natural move.

In typically contrary fashion they don’t actually tell you who’s who, but anyone who knows the bands will not be surprised to learn that Gurt’s pair is viscous, while TW do something little more groovy.

Things kick off with “Owlmegeddon” and it is a hoot (do you see what we did there?) One of the Gurt tunes, it has bludgeoning intentions after its menacing bass has done something pretty evil sounding. The riff that it gets itself involved in is big enough to move mountains, never mind a bird’s nest. Their other offering is “I Regret Nothing”, an almost hardcore punk effort that boasts a chorus that approaches catchy.

Trippy Wicked’s contributions, “Super Fun Happy Slide” – perhaps the only rock n roll song to include the line “up and at them Jiminy” – is a real slammer, and its fuzzed up tones are at odds at with the more monolithic, but no less superb, “Reign” – the lengthy Sabbathy labyrinth they close things with.

There’s one other song. Right in the middle, that the two bands come together for “Revolting Child” – T Rex’s “Children Of The Revolution” to you and me, which is given the type of treatment that you can probably only describe as “unique”.

It’s fair to say, though, that everyone sounds like they enjoyed themselves and that vibe transfers across the whole half an hour.