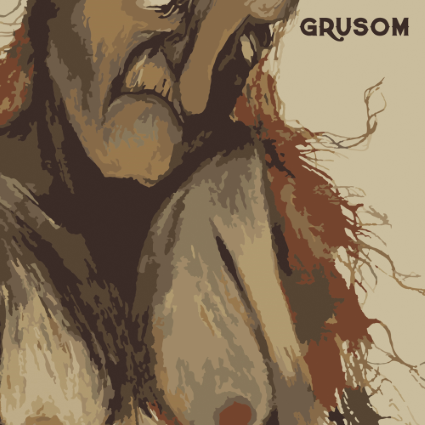 It’d be easy, if you so wished, to listen to the debut record from Sweden’s Grusom, and just marvel at its glorious tones. Swirling organ, fuzzy guitar, stomping rhythm section, it’s all here and the six piece have constructed something that sounds incredible.

At first glance in fact, you could be forgiven for thinking that Grusom were just another retro band in the great slew of them at the moment. A really good one, but one that just fits in with all the others you love right now.

Then, you peel back its layers and, good Lord, it’s got a dark soul.

It all starts pretty conventionally with the instrumental psych rock affair of “First Sermon” even “Come Closer” is pretty jaunty, and possesses a magnificent guitar line at the same time. Then comes “Evil” and if they’d hinted previously that they weren’t the type of band to drive to the seaside with their Beach Boys records on, this time the monster is well and truly on the loose.

“I have committed every mortal sin,” Nicolaj Hoffmann Jul croons in his wonderful, rich voice, “and I don’t regret the lives that I took.” It’s startling, it jars with the music and that’s the point.

With the genie out of the bottle, they ain’t putting it back and from here on in, the record gets downright macabre and malicious. “Cold Stone” – a hands down belter of a track – is a deliberate and polished slice of rock n roll but one with the line “I’ll see you on the other side/I’ll see you on the suicide” at its heart.

The single “The Journey” travels to somewhere dark and despicable, but does so quietly and in a most understated way as the organ rumbles away, while the anti-religious “No Gods” is the best song on a record full of them.

Much of the attention you’d guess will centre of the absolutely despicable tale of the nominal title track and let’s just say that “Gruesome” is just that, as it deals with a subject matter that “Diane” by Husker Du began. It’s truly horrible and it’s truly remorseless, but on the plus side it’s got a fantastic guitar solo, so whilst we are sorry the character in the song has killed twin sisters, but every cloud……

Grusom are a band, and “Grusom” is a record that seems to revel in the unexpected. Underestimate them at your peril.

This might be X Rated stuff, but it’s marvellous.