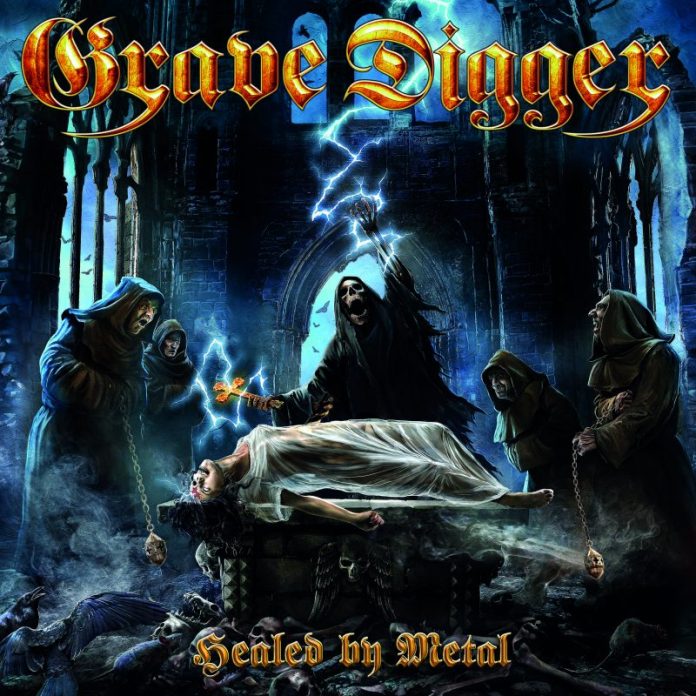 Grave Digger command you to kneel at the altar of metal

It might be tempting to say that true metal has made a comeback in recent months, perhaps as a result of the fragmentation of what metal actually is (I mean, come on, something got sent to MV the other week that reckoned it was “post-sludge” if you please…..) and the fact people are looking for something familiar.

Thing is, it would be tempting, but to Chris Boltendahl and the rest of the warriors in Grave Digger true metal never went away, and frankly if they even knew other forms of headbanging stuff existed then Grave Digger would give precisely no shits whatsoever.

“Healed By Metal” is either their 15th or 16th album (this depends on whether you count the one they released under the name “Digger” in the 1980s or not) and like all the others you are either going to like this or you aren’t, and even more pertinently Grave Digger couldn’t change a thing even if they wanted to – and brother, they really don’t.

Jut look at the album artwork and it’s pretty obvious. So it’s double denim on, (battle jackets a must, obviously) and horns up from the off. The title track explains the medicinal powers of metal (its only concession is that Boltendahl sounds slightly angrier and Lemmy like than usual) while “When Night Falls” seethes with all kinds of rage and foreboding and “Lawbreaker” suggests that there’s going to be loads of bikers racing about – or at least that’s what we assume that’s what “a hundred pounds metal” means, its either that or a bloody big Marshall stack.

And so it goes, and as easy it is to take the piss out of Grave Digger and bands of their ilk, “Healed By Metal” is lovingly conceived and brilliantly pulled off. Because as much as we hate parody bands at MV (and that means you Steel Panther, you odious oiks) you can never level that accusation here, rather GD mean every single word.

“Free Forever” adds an acoustic hook, but basically does the same as it brethren, “Call For War” is a NWOBHM homage, and if you need us to explain what “Ten Commandments Of Metal” sounds like, then you’ve probably got the wrong website.

It’s the sheer genuine sense of metal’s history in these ten song that makes “….Metal” great, “The Hangman’s Eye” is soars like a power metal song, except to call this power metal would be to miss the point. This isn’t the work of fellow German’s Freedom Call, for example. This is purely and simply metal. That’s it and that’s all it ever wanted to be.

“Kill Ritual” is as ominous as you’d want it to be, “Hallelujah” is suitably celebratory and closer “Laughing With The Dead” does that thing that modern day Maiden does and builds slowly, but when it does, it has big old balls of steel to groove with.

It’s doubtful that “Healed By Metal” will gain Grave Digger millions of new fans, but then it’s doubtful that was ever the point 36 years into their history. The fact is they are preaching to the converted here and there are few bands who are better at doing just that.