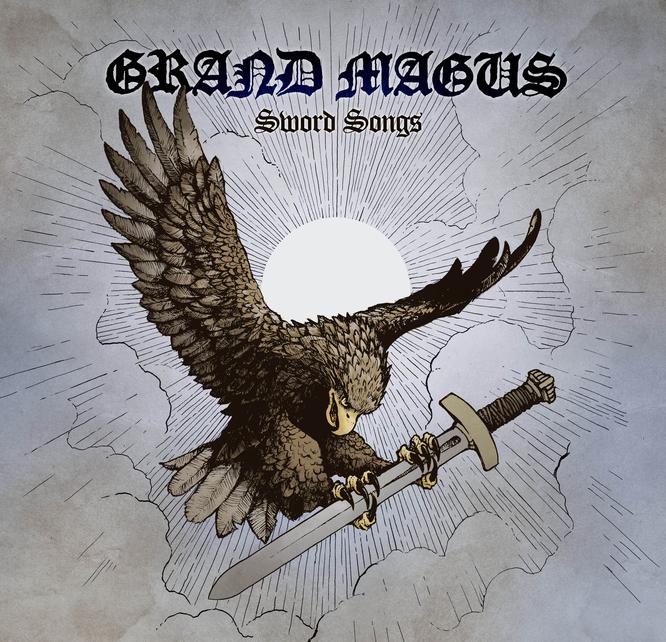 There are those bands who, over the course of a lengthy career, like to go through genres and concepts with the attention span of a four-year-old on a two-day Skittles bender. Then there are those, who during the same period want to do nothing more than hone their craft, get better and better, and keep releasing albums that are true to their concept and beliefs.

We’d prepare to wager with you right now that Grand Magus are one of the latter.

“Sword Songs” comes a couple of years after the brilliant “Triumph And Power” and finds the trio in largely the same mind set. That is to say the same mind set really, that they’ve been in since 2001 and seven albums ago.

Album number eight, though, is a stunning affair. The nine tracks here, are simply the best representation you can imagine of Grand Magus in 2016, and there is scarcely a wasted second here. This is power metal, but not as we know it, because where the likes of Manowar and their ilk want to do things in the most OTT way possible, instead Grand Magus trim off the fat and just give classic sounding metal its head.

“Freja’s Choice” starts with a roar from fontman JB, and pretty soon locks itself into a mighty riff that knows exactly what its influences are and gleefully embraces them, “Varangian” adds a touch more of an ominous tone, but its chorus  – “we are warriors/defenders of steel” – is simple and simply designed for thousands of denim clad blokes to sing with their fists clenched at gigs throughout the world.

In fact, as brilliant as Grand Magus have been over the years, it’s doubtful that they’ve ever sounded as good as this. “Forged In Iron – Crowned In Steel” races off excitedly looking for a parallel universe where Rob Halford is king, and “Born For Battle (Black Dog Of Broceliande)” knows exactly what its doing when it starts with a chanted “Hey, Hey, Hey.”

Elsewhere, it gets pretty heavy on occasion – never more so than on “Master Of The Land”, although the Maiden-esque rollicking good fun of “Last One To Fall” isn’t a million miles behind and “Frost And Fire” has a hook big enough to hang your coat on.

A folky instrumental – “Hugr” – provides some light and shade, before it morphs into a huge, crushing behemoth that largely sums up this band. Whether JB, Ludwig or Fox have ever sat down and done the corporate thing we would highly doubt, but if they have then “Every Day There’s A Battle To Fight” is it.

Glorious, majestic, soaring and completely comfortable with itself – words that don’t just apply to this track, but to the rest of “Sword Songs,” too.