REVIEW: THE GRAHAMS AND FRIENDS (LIVE IN THE STUDIO) 2017 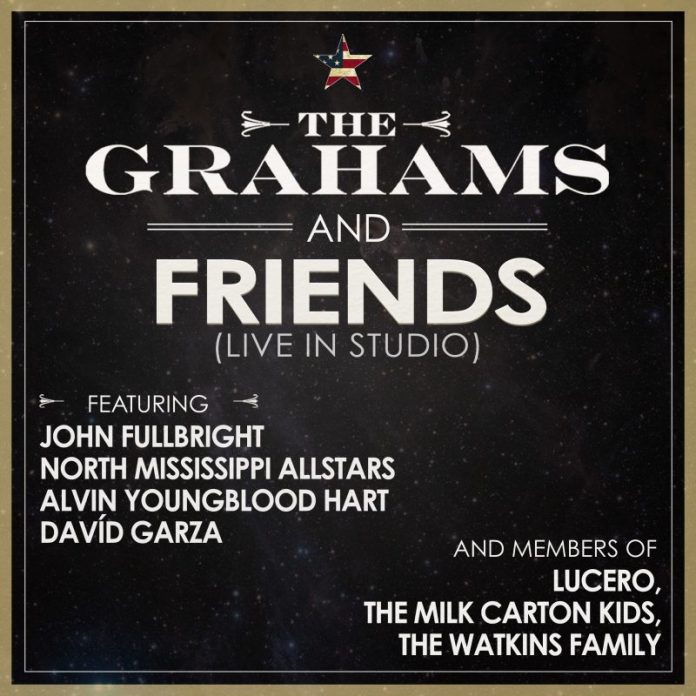 If you haven’t heard of The Graham’s (and there’s no shame in that either given that their albums haven’t ever been made commercially available in the UK), then you might be aware of some of the guests that line up on this live album.

All of them popped into the studio for a five day jam session to record some different versions of songs that appeared on the husband and wife duo’s two records to create an album that ticks every single box of folk music, from the traditional shuffle of “Glory Bound” (sung here with The Watkins Family), to the sublime “Griggstown” with its pay off line “I might have been your girl once, but you’re gonna be my man” and the beautiful and fragile “Lay Me Down”, everything you could wish for is contained in its 14 tracks.

The real sense of heads down fun of the sessions comes through to the listener (a hard thing to do on live albums). This is not shown anywhere better than on “Gamblin’ Girl” which is a real highlight. This barroom boogie is juxtaposed by the dark imagery of “Tender Annabelle” – there are two versions of it here, the one with John Fullbright’s duet is stunning bringing to mind recent Steve Earle efforts.

Everywhere you look here there’s something brilliant. There’s a cover of Alejandro Escovedo’s early 1990s classic “Broken Bottle” which is made their own, “Kansas City” which is part New Orleans on Mardi Gras and part Springsteen’s Seeger Sessions, the compelling piano lad ballad “The Lonely Ones” featuring The Milk Carton Kids, while “Biscuits” is sassy as you like (unless we’ve misunderstood the line about “pour some sugar down in my bowl” of course….)

There’s even time for some introspective reflection on the superb “Blow Wind Blow” which is proof of the sheer versatility of the songwriting here, never mind the special guests and the atmosphere – they are just an added bonus.

If a live album might sound a strange introduction into a band then think of it like this: If you wanted to convince someone of the majesty of Thin Lizzy then you could do a lot worse than play them “Live And Dangerous.”

And if that is, was and always will be the greatest live record ever made, then this is right up there.