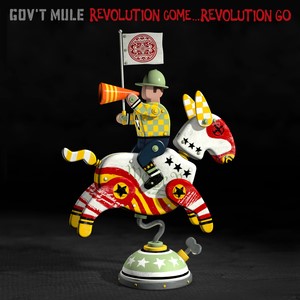 Warren Hayes and the boys are back and Bernard loves it

It’s hard to believe that Gov’t Mule have been around since 1994 and that their brilliant debut album is well over 20 years old – how time flies?

I first became aware of Warren Haynes when I saw a reformed Allman Brothers Band at Hammersmith Odeon in the summer of 1991. In truth I always found The Allman Brothers a bit hit and miss, moments of greatness but a bit of filler here and there causing my concentration to wander. That night was no different but I remember being impressed by the ‘new’ guitarist. I subsequently picked up his solo album ‘Tales Of Ordinary Madness (great album by the way and worth checking out) and when I heard of his new venture with Allan Woody, I was at the front of the queue.

Since then I’ve become a loyal fan and have seen them live many times, both in the UK and abroad. Unfortunately by the time we got to see them in the UK, co-founder Allen Woody had passed. Those first three albums had a much more visceral edge to them and I have no doubt this was down to Woody’s influence. Those records took a lot more effort to get into but once the listener was on board, the payback was rich and rewarding. In fact to this day all my favourite Mule tracks come from those albums.

The Band’s work ethic is to be commended and their live shows are readily accessible with regular European visits and it’s great to see, as they now start to venture into the UK’s provinces, the venues are full, ensuring repeated visits. This is without doubt due to the constant quality of the music coupled with great live shows, no two of which are ever the same.

You will have gathered from this lengthy opening that I am a fan and treat every new release as a special event and ‘Revolution Come…Revolution Go’, their 10th album is no exception – I really want it to be a great Mule album, so the question is how does it shape up?

Haynes has always picked great opening tracks for Mule albums and ‘Stone Cold Rage’ is no exception. It thunders out of the speakers with a rumbling groove underpinning the funky rhythm guitar and Haynes’ blistering lead. Vocally he sounds pissed off and angry, an underlying theme throughout the record as he comments on the world at large. It’s a great song and one that is already prominent in their live set.

‘Drawn That Way’ keeps the pressure on with its huge opening guitar chords and which launches halfway through into a fast pace lead break thought to the song’s conclusion –it’s just brilliant.

‘Pressure Under Fire’ calms things down a notch. It’s a typical Mule album track, mid-paced and bluesy with strong lyrics. ‘The Man I Want To Be’ follows and is a slow-paced number that could easily have slotted into Haynes’ solo albums or even in an ABB set. The mellowness continues with ‘Travelling Tune’ – this is another that could have found a home elsewhere and is almost a surprising inclusion on a Mule album. However the performance is great and ensures that it doesn’t feel out of place. It also has a chorus that gets into the subconscious first time round, which is no bad thing. The guitar work is pure Dickey Betts and it’s no surprise that this song is already featuring heavily on stage.

‘Thorns Of Life’ is the longest track here, clocking in at nearly 9 minutes. It also is reminiscent of earlier Mule songs but it’s no rehash of something old. This is a real ensemble piece; brooding and dark it finally sparks to life as it approaches the half-way point with the entire Band show-cased.

‘Dreams & Songs’ is going to become a Mule classic. It has the same gospel feel of Soulshine with a great lyric and a terrific vocal performance from Haynes, who it must be said is singing well throughout. ‘Sarah, Surrender’ follows and this has a Stax backbeat and a real soul flavour to the chorus in the way Steely Dan records sound.  It’s the lightest song here and also the shortest and it provides a nice counterpoint to the heavyweight songs elsewhere on the album.

This leads to the title track. An 8 minute song, it’s an ambitious peace featuring Danny Louis’ funky ‘Superstition’ keyboards and Haynes’ wah-wah guitar. The groove is rock solid and the interplay between drummer Matt Abts and bassist Jorgen Carlsson before the middle bridge takes me back to those first three albums – no higher praise as far as the reviewer is concerned.

‘Burning Point’ is next and features Jimmy Vaughn on shared guitar duties. As you’d expect, this is a big number and the guitar work is all that you hope for between these two 6 string giants. It fizzles and crackles throughout and is just great.

‘Easy Times’ is a slow, soulful number where the vocals again shine and are on an equal footing with the guitar playing and that’s saying something as the guitar solo on this one is a gem.

The album closes with a cover of the old blues song ‘Dark Was The Night, Cold Was The Ground’ and they saved the best to last. Its menacing power has Haynes’ guitar turned up to 11 and Abts pummelling his drums into submission. It’s a spectacular performance which will no doubt be heavily featured in the months ahead.

Do I think it will chart topping best seller? No.

Do I think it will see them suddenly filling arenas? Probably not.

Do I think it is a great Gov’t Mule album – a resounding yes on that one. This is exactly the album that long-time fans wanted and hoped for and which contains at least half a dozen songs that will be part of their live repertoire for years to come. Warren Haynes, who it must be said is not far off his 7th decade on earth, still sounds relevant and contemporary in his writing, his guitar playing is a constant wonder and his singing is as good as it’s ever been. Factor in Matt, Danny and Jorgen all performing to the same standard and the Band, which had been treading water for a while whilst Haynes concentrated on his solo work, have come back with their best record in over 10 years.

The album is out now and Gov’t Mule will be touring the UK in October.