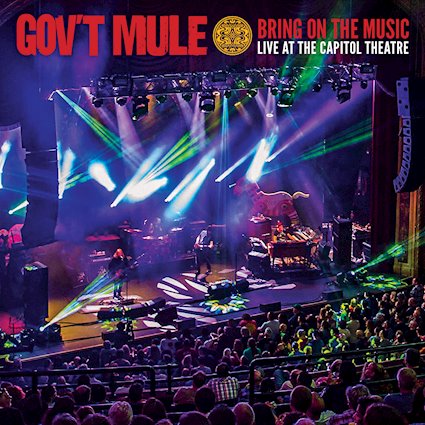 The live album – the staple of many seventies record collection. More often they were doubles and they were often career defining releases that summarised a Band’s achievements at that given time. Despite their success, the live album seems less relevant in today’s music business, where ticket sales are far more important than record sales and live albums have somewhat lost relevance..

Gov’t Mule have always had a different approach to live releases; for many years now anyone attending a Mule show has been able to buy and download the set they had seen direct from the Band’s website. Additionally, selected archive shows and special events have been officially released along with the afore mentioned soundboard recordings. You will gather by this that there are a lot of live Gov’t Mule recordings already available for fans, so what does Bring On The Music have to offer?

The two shows were recorded in April 2018 and their release is to coincide with Mule’s 25th Anniversary. Reading the press release the focus of this release would appear to be the DVD – it is clear Mule shows have moved on somewhat in their stage presentation and a professionally filmed record will appeal to many fans. However this review is solely for the music CD’s, of which there are two to choose from. The 2CD/2DVD set is the visuals from one night and the sound from another. The separate 2CD set is the audio feed from the DVD and yes, as one would expect from Gov’t Mule, the two sets are different.

The focus generally is on newer material but there are plenty of classics as well. It’s also good to see less lengthy jambs, incongruous covers and guest appearances, which means more room for original Mule music and a few covers that sound like they were always Mule songs. For this reason I think the 2CD set that comes with the DVD’s is the better collection. The set is book-ended by ‘Traveling Tune Parts 1 & 2’ but between that are some real fireworks.  A fierce rendition of ‘Railroad Boy’ is followed by a jaw-dropping ‘Mule’, the first of many to contain a blistering solo (this one being played with a slide). ‘Drawn That Way’ has another superb solo and ‘Funny Little Tragedy’ is shown to be one of the great later era Mule songs. The first CD closes with a brilliant trilogy of performances – ‘Sin’s A Good Man’s Brother’ is not played that often and listening to it here it’s hard to understand why – this version is feral. There is real bile in the lyrics and delivery of ‘Mr. Man’ and the closing ‘Dark Was The Night, Cold Was The Ground’ is a belter – another blues cover that they have made their own.

A sumptuous ‘Life Before Insanity’ starts the 2nd disc and after a lengthy ‘Thorns Of Life’, we get a really funky ‘Revolution Come, Revolution Go’, complete with brass that I assume is played by Danny Louis – it’s clear that the Band are really enjoying the interplay between them and it’s a great version of the song. ‘No Need To Suffer’ follows – I’ll admit right now that this is the reviewer’s favourite Mule song and the version here doesn’t disappoint. In fact it stays pretty faithful to the original album recording and is all the better for it. ‘Dreams And Songs’ is rapidly becoming an essential song from Mule’s last studio release and it is followed by a simply breath-taking ‘Time To Confess’. ‘Comeback’ and ‘World Boss’ take us nicely to another outstanding cut. ‘Bring On The Music’ is the title track of this release for good reason and this version is right out of the top drawer.

CD2 set is not bad; I just don’t think it has the same quality in depth of CD1. I suppose some of that will be down to the listener’s personal preference of the songs chosen. ‘Raven Black Night’ is not one of my favourites and I won’t ever listen to the 17 minute long ‘Trane-Eternity’s Breath-St Stephen’s Jam’ again. However these are counter-balanced by a spot-on ‘Thorazine Shuffle’, an extended ‘Blind Man In The Dark’ and great versions of ‘Larger Than Life’, ‘Endless Parade’ and ‘Lola Leave Your Light On’ – the last of these is particularly good and is played with a real aggression. Add to that alternative versions of ‘Revolution Come, Revolution Go’ and ‘Bring On The Music’ and it’s still going to appeal to the hard-core Mule fans.

So who is the album for? I’m not sure it will find any new fans, as they are probably better off starting their Mule journey with the Studio albums. The loyal fan base the Band has will pretty much buy anything Warren Haynes/Gov’t Mule release – like me they are all in for the long haul and we’ll no doubt be buying both sets to show our continued support and to keep our collections complete. If I’m right on who the audience will be for this release, then it absolutely delivers for them, especially on the 2CD/2VDV set. As a record of Gov’t Mule 25 years in, it’s a very relevant and faithful record of the moment and it stands tall amongst the many other live performances available.