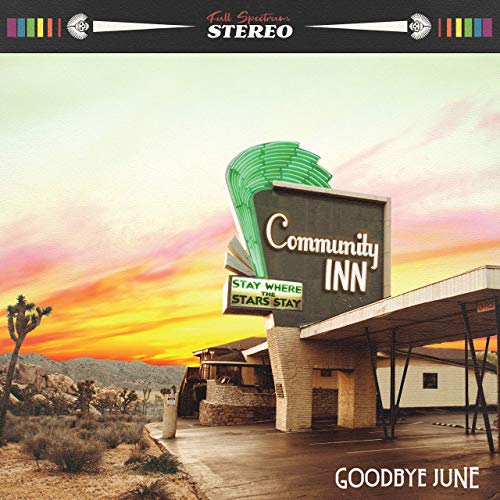 If you assume, so goes the supposed “whimsical” thing said by “characters” (and we’ll call them that because it’s politer than other words beginning with “C”, isn’t it?) you make an ass of you and me.

And yet, don’t lie here, everyone makes assumptions, don’t they?

I couldn’t make the gig in the end, but Goodbye June played near to me the other week (just after “Community Inn” was released, actually) and not being aware of them before, I did what any music geek does: I looked them up to see if it was worth the trip.

And then you see the thing is on Earache Records – who have handled Cadillac Three and Blackberry Smoke – and you think: southern rock, ace.

The thing about Goodbye June is that while there is an element of good ol’ southern hospitality here, they do things in rather their own way – and that is with a very trippy, blissed out vibe.

There is a gentleness, a mellowness here – and I don’t know if they’re stoned or not and it ain’t my concern, but it doesn’t half sound like they are in a hammock in the afternoon sun with the rest of the day to chill.

But crikey, its catchy. “Rolling Off My Tongue” has a cracker of a riff, and Milbourn has a voice that is equal parts Jesse Malin and Robert Plant, so even he doesn’t sound like anyone else either, and there is a tightness about the band.

If the whole thing is slightly surprising, then the way Baker – the band was formed after his brother passed away – pulls riffs out of seemingly nowhere is incredible. He does it time and time again. The one on “Universal Mega Love” is a good example, that’s before it trots off down some Led Zep lane and it’s happy enough down there too.

“Secrets In The Sunset” couldn’t sound more content if it tried, the evocative, poetic lyrics and the fact it takes its own time, set this one apart, while “Be Yourself” – a great song in its own right, with an acoustic tinge – is in many ways a metaphor for the record, surely?

The slide guitar on “Lonely Beautiful People” is sublime, and the strings make it the highpoint here, although, “Natural” the rocky yin to the previous yang, isn’t far behind (plus it gets cowbell bonus points) and “Joan And Dylan” the road song, the escape song if you like is another cracker – and the chorus is spot on, and will have you humming it.

In fact, each one of the cuts (and I am going to bet you that GJ call songs “cuts”) has its own distinct charm. “Anywhere The Wind Blows” captures the spirit of the troubadour, as well as getting the word “libations” in a song, which is no mean feat.

“Switchblade Heart” is a funky about turn. Something close to pop rock, and it’s not about to make apologies (plus Matchbox 20 would have had a gold disc for a lot less) “Live In The Now” – the whole vibe of the record is about making the most of what you have in the present – has a kind of “Hotel California” strum at the start, and while I’d argue that none of these is a direct ballad, as such, then “I Don’t Mind” is the closest.

“Free Child” goes full on trippy and psychedelic. A record that sounds like it was made on a commune without the interference of the outside world needed it too, although it is striking that none of this is too long and nothing outstays its welcome.

That is good too, because everyone seems welcome at “Community Inn” and this is one a really warm sounding record, but it is also one of the more innovative takes on the southern sound that I have heard in a good while.