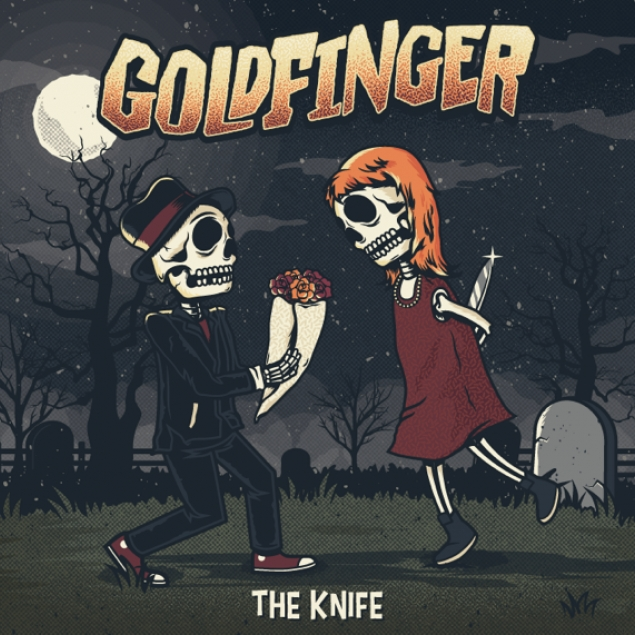 Steve dissects their first one for a decade

This is the first Goldfinger album for almost a decade after the band’s last release Hello Destiny… Minus Charlie Paulson and Darrin Pfeiffer, John Feldmann is the only founder member remaining. For recording, Feldmann was joined by MXPX bassist Mike Herrera, Story of the Year guitarist Philip Sneed, and drummer Travis Barker. It’s a smart move by Feldmann, as the big names draw attention away from the loss of former bandmates, and means that every new member is at least as talented as the person they replaced.

The Knife is a good album well produced, it’s loud, brash, bouncy, fun, catchy and all the thing a ska/pop-punk album should be. Style-wise the tone’s more Reel Big Fish than Blink-182. That is, there’s more ska (and indeed reggae) in the mix than straightforward pop-punk.

The album starts with a great pop punk tune in ‘A Million Miles’ which is classic Goldfinger and ‘Get What I Need’ is a bouncy classic ska track complete with full brass ensemble. The tight pop punk of ‘Beacon’ with excellent guitar and bass riffs and Barker’s signature inventive tight drumming, moves between rock and ska. The tunes are catchy and the musicianship is excellent as you would expect from this group. The lead single, “Put the Knife Away” gives all the new members the chance to show off their musicianship skills.

“Orthodontist Girl” adds the humour, “Your hand in my mouth, holding that tiny vacuum thingy, I hope my tongue doesn’t accidentally touch your fingers, because that would be weird“. I think it’s safe to assume there are no metaphors here.

Songs like “Lift Off” and “Don’t Let Me Go” add a reggae tinge while “Say It Out Loud”, for example, throws back to “that cover song” with another bouncy rhythm. Milla to me has a slight Pixies vibe.

The Knife is poppier than anything Goldfinger has put out before, but not to the point where some of Feldmann’s production work has taken him, this is not boy-band-with-guitars. There are examples of what he’s learned as a producer mixed into The Knife, blending this with classic Goldfinger style.

This is a good solid record and the best approach is to judge it’s on it’s own merits rather than against the groups previous output as it finds Feldmann and co in reflective mode and on a slightly different path which can only be expected after almost 10 years away.