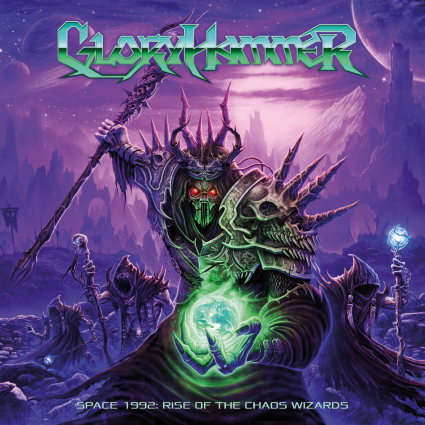 The comedian Frank Skinner had a routine back in the early 1990s that went something like this: “Have you ever noticed,” he’d say. “That you can make anything believable by adding the words ‘in America .’ Like in the pub, you tell people you read in the paper that people have stared wearing hamburgers on their feet and your mates are going ‘shut up you idiot’ and then you say ‘in America’ and all of a sudden they believe you.”

The musical equivalent is this: “Someone has written a song called “The Unicorn Invasion Of Dundee” and your mates go, “no they haven’t ” and you reply. “The band has Christopher Bowes in.”

Bowes, for the uninitiated, is the genius behind the rum swigging, swashbuckling Pirate metallers Alestorm, so just imagine what his “other band” are like….

Answer: Gloryhammer are amazing. In every sense of the word and on every single level. On the tour for their last one “Tales From The Kingdom Of Fife” an evil wizard was killed onstage. By a guitar. And an invisible princess got molested, and an invisible Pineapple got crushed.

And if that doesn’t float your boat, then to be honest, you probably aren’t going to care that the world is under threat and the Astral Hammer of Angus McFife is needed again to save the world from an evil sorcerer who has been frozen for centuries, are you?

And what’s more, Gloryhammer aren’t bothered, they are far too busy enjoying themselves with some of the most wonderfully OTT Power Metal since…..ooooh, their last record.

Stupid storylines of rewritten history can only take you so far, though. Gloryhammer know this and have all the bases covered. Most of their epics aren’t really epic at all. They are merely four minute pieces of magnificent power metal, with keyboards parping, lots of Latin and riffs somewhere in between Maiden and Judas Priest racing around for supremacy.

There’s spoken word bits, and there’s instrumentals, and you’d call it pompous except for one thing: the people who are making it, and singer Thomas Winkler (Angus McFife to you and me) is key in this, buy into it all of this so completely and tongues are so far in cheeks as to make it the very opposite of pompous and instead it all becomes a glorious in-joke. Good god, there’s a song “Goblin King Of The Darkstorm Galaxy” here, isn’t that enough said? Oh and he’s searching “for cosmic fire”.

To be blunt this will polarise opinion in the way that only Power Metal can. Those that love it will adore songs like “Hollywood Hootsman” (about a hero that rode across the sea to take America a thousand years ago) and those that don’t, won’t.

The musicianship here is superb. The prog flourishes to “Victorious Eagle Warfare” (really, it’s called that) and the guitar work on “Questlords Of Inverness Ride To The Galactic” (again, really) would make Dragonforce jealous.

The war for the Galaxy is won. Thanks to the “Heroes (Of Dundee)” (they ride Dragons of steel, by the way) and the story is concluded with a damn near 10 minute piece of majesty called “Apocalypse 1992” which isn’t far from being one of the best songs in 2015. It’s definitely the barmiest and the almost certainly the only song ever to concern itself with the Cosmic Dwarves Of Aberdeen (for the final time, honestly, this really happens).

And so it is in the world of Gloryhammer, Alestorm might be the best by a mile of the Pirate Metal bands, but they aren’t the only one. Maybe that’s why Bowes formed this band, because – and yeah we know the know the word unique is overused – they truly are one of a kind.