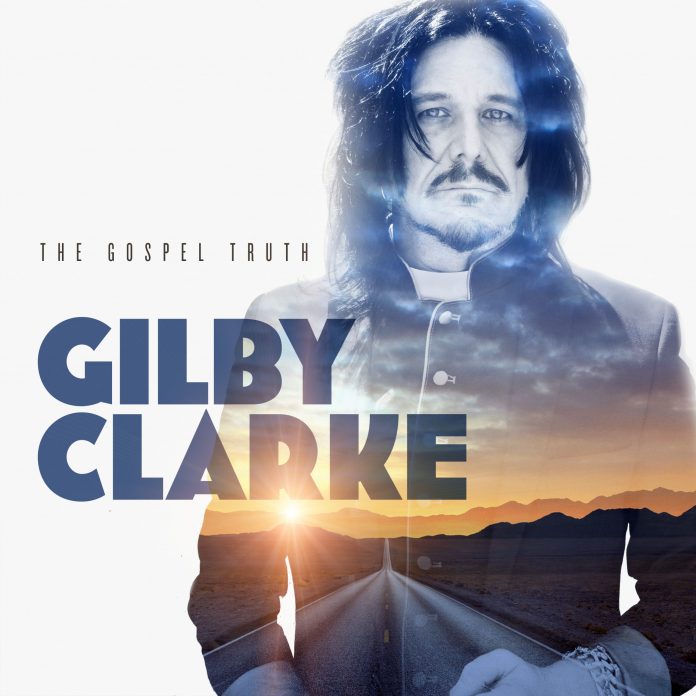 Never mind what else he’s done in his career (and there’s been a lot) I am here to tell you that 27  years ago Gilby Clarke released one of the great solo albums of our time. “Pawn Shop Guitars” not only has “Tijuana Jail” on it, it also has a version of “Dead Flowers”, that makes the Stones original look like a lot of fuss about nothing.

Fast forward  to 2021, and “The Gospel Truth” is his first record since “Swag” about two decades ago (and we saw him on that tour too, at our fave – long since gone – venue).

All of which is to say that I am a fan of GC of long standing, but as much as you try and judge him on his solo merits alone, there’s that stint in arguably the biggest hard rock band of all time. Those years mean the quality of special guests on “….Truth” reflects his time in the Premier League.

The best thing about it, though, is for all the garage rock stylings of the opening title cut, it’s the dirty bass groove that you must notice. The backing vocals and the horns perhaps indicate a wider sonic scope too, whatever, this a is cracker of a start.

Perhaps not as immediate as some of his other solo work, “Wayfarer” is typical, in that it broods, in a blues dark alley – the organ alone tells you that – but its subtleties reveal themselves to you, before the bridge has a 60s flavour and the guitar work is every inch what Clarke has always done.

A more modern record than you imagined it might be. The single “Tightwad” is something of a floor-filler, and yes, perhaps “Rock N Roll Is Getting Louder” might be the best thing here, but it still sounds a touch like “Bohemian Like You”.

“Wise Old Timer” is built around a cracker of a riff, and the magnificently filthy sounding rock n roll of “Violation”, is like Dan Baird has gone punk rock.

A real grower of an album – that is to say, when I first listened to stuff like “The Ending” I perhaps didn’t appreciate how good its glam stomp was – it is helped by its brevity. 33 minutes. Ten songs. Nothing it doesn’t need.

And no ballads, just proper heads down guitar based rock. The drums are pummelled and the lyrics on songs like “Dangerous Sin” are clever, as is the way it seemingly effortlessly always finds a hook you remember.

“Rusted And Busted” is one of the few times you even hear an acoustic strum (its buried deep below the lead) and “She Won’t Fight Fair” is perhaps the one for the classic rock fans to gravitate towards.

“The Gospel Truth” though, is an interesting, compelling record. One that – although played by a gifted guitarist – is very much a collection where the song feels like the only important thing. And that, it seems, is Gilby Clarke’s truth.