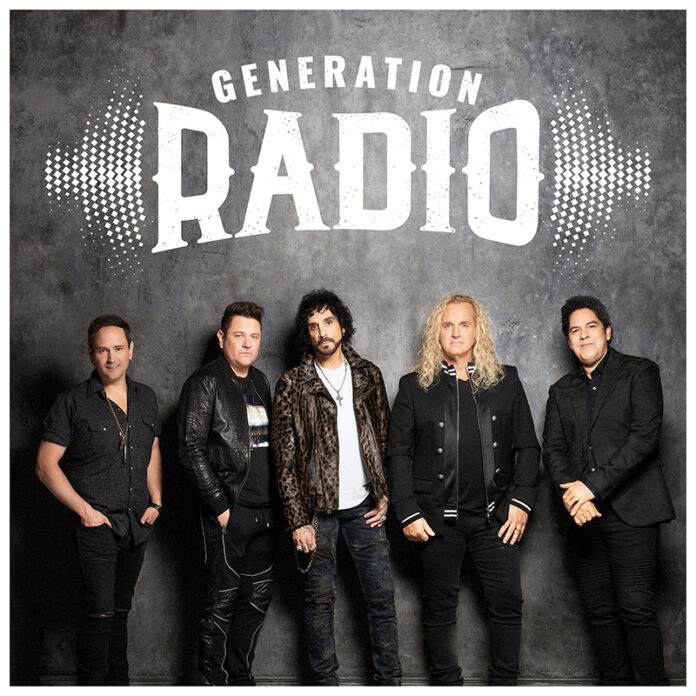 It’s funny how things work out. This time last week I might not have picked up this for review. Unless it’s the utterly mighty FM, I haven’t listened to AOR music much in the last decade, never mind reviewing it. Then last weekend I got involved in a conversation about Nelson.

Nelson were two brothers. Related to Willie Nelson (I forget how its 30 years ago) and its my contention that their “After The Rain” record was the finest AOR record of its generation.

So, as you do when you’re a music obsessive, you look through for things that might have the same effect in 2022. Then this arrived.

Now, this is the bit where I have to admit a lack of knowledge that few would. Generation Radio are a supergroup. No argument. Their members are in Journey, were in Chicago, Rascal Flatts, worked with Tom Petty and you name it.

But. The only one I was actually aware of was Deen Castronovo and I wouldn’t class myself as a Journey fan in any way.

The point I am making is that I am not the natural ballpark for this, and I am not going to lie either and say I was excited to hear it.

It begins with (I assume) a Castronovo drum solo, and a thunderous “Why Are You Calling Me Now” and its 1986 again. I am 11 years old listening to the radio that my gran bought me. And that’s all there is to it.

Classic AOR. The sort you used to listen to, and these boys are still making. Jason Scheff (apparently he’s been in Chicago for thirty years) has a stunning voice for this here stuff and the solo soars as high as the vocals. The pay-off “there’s nothing small about talk after midnight”. Boom, That’s exactly what you needed this to be.

A couple of the members Jay DeMarcus and Chris Rodriguez have a background in Christian music and “Angels” has a bit of that, but what it also has is stunning harmonies and DC’s voice. And lets be real, the fella can belt out a tune.

After the early spell on the gospel circuit, DeMarcus found fame in Rascal Flatt’s. A mega selling country act, and there’s a couple of things on here that sound like all those county pop artists that I adore way more than sensible – “All Night To Get There” – is one and honestly, it’s the sort of thing you wish Bon Jovi did instead of the stuff they do these days.

As we all know this music is about girls, mostly. “Hope You Find it” is your big old power ballad to the girl you lost, “Time To Let It Go” is the one where you’re kicking her out (and right down to the fact I thought Glenn Hughes was doing the vocals, it really sounds like Dead Daisies) and “Lights Go Out In Paradise” is sort of the middle ground between the two.

What they’ve all got, mind you, is a skill. They’re all brilliantly played, they all sound amazing and they sound like they cost a million dollars. This, frankly, is polished like the best china.

“Don’t Go” is another power ballad. Reflective, piano led and all the vocalists really meld superbly, while “Smoking” and its absolute sleaze is a departure. More akin to the Damn Yankees than anything else here, it’s the most rock n roll affair, that’s for sure.

“Anything But Us” could just as easy be Luke Bryan or Dustin Lynch, and “Waiting For Your Sunshine” is more blue collar, sort of latter day Springsteen circa Wrecking Ball. It will be interesting to see if they go further down this route, if there’s album number two. It suits them.

It all ends in suitably balladic fashion. Piano’s tinkle with the silver lining. This is a slow dance for the old romantics. “Finally Got It Right” is the reason I usually balk at this sort of record, frankly, but they only do it once, so fair enough.

Generally though “Generation Radio” is absolutely excellent. It belongs in FM rather than digital, but its top of the pops whichever way you look at it.