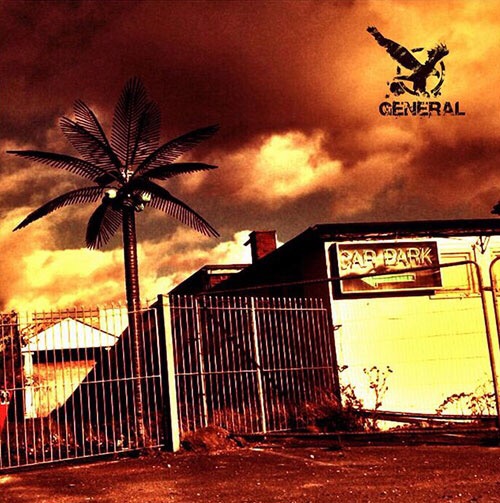 Coventry’s finest get around to album number two, and MV grovels

If you will permit some unusual self-indulgence, MV would like to start this review with an apology to General. It’s not that we haven’t liked them for years – we have, ever since we first saw them – or even misjudged them, criticised them, or anything of the sort. Rather, back in the autumn of 2014 we found ourselves interviewing the guys. A taster piece was written, during which guitarist Dave and singer Graham rather neatly debunked any notion that they gave two shits that they get called a “stoner band” (their PR had been keen to suggest this was an issue) and were extremely pleasant and engaging.

Rather the apology comes because the main interview feature, published a week or so after (and which if we do say so ourselves was rather good) disappeared when some techy changes were made that we (obviously) didn’t understand.

In fairness this reviewer has bumped into assorted members of the outfit over the last 12 months and they haven’t seemed too bothered, in fact, to be honest, the guys that make up General don’t strike you as the types to be too fussed about anything.

This is rather neatly exemplified by one more fact: that show, some 14 months ago was officially the “Goji” album launch show (although Dave and Graham were pretty clear that the record wasn’t going to happen quite yet – it wasn’t even named) and they merrily played half of it onstage.

Proving, though that good things do indeed come to those who wait (and wait), now “Goji” is finally here we can say with certainty that it is a stonewall belter.

Appropriately for General, it doesn’t do anything quickly, it’s ten songs clock in at over an hour with one, the brilliant psychedelic “Well, Well, Well” taking 11 minutes and turning into a classic rock jam while its at it, but instead of speed it does everything with a confidence and a class.

It kicks off with one of the fattest, thickest and most fuzzed up riffs you could wish for, and “Required To Inspire” which was earmarked for opening duties from the second it was written, you suspect, is also a catchy and bluesy affair.

These are guys – and this is an album- that know their way around the classic sounds of Sabbath, Corrosion of Conformity, Down, and all the rest, but pleasingly they – and it – don’t sound exactly like anything else. “Your Fool” benefits greatly from Graham’s delivery. Capable of wailing like Chris Cornell when the mood takes him, here he opts for an odd rhythmical pattern, which once you’ve got used to it worms it’s way in.

Guitar tone is a given throughout “Goji”, but unlike some bands of their type, General are happy to let their down and party. “Underground” knocks the booze back with abandon, and “The Date” is gloriously simple, both in terms of its rhymes and its intent, including drinking Sambuca and a girl playing pool in denim shorts. But this is General, this isn’t conventional, so someone gets their head kicked in. Even still you wouldn’t bet against them enjoying the night out, such is the palpable glee here.

And, almost as a palate cleanser, there are a couple of lighter moments – musically at any rate – “Aluminium Woman” is built around an acoustic riff, then builds to a crescendo, and you’d guess the boot to the balls of a chorus is designed with live shows in mind.

The second of the subtler offerings is actually the last track here. “Not Alone” isn’t far from being the album’s highlight either. A slinking, meandering affair it is undercut with an air of menace. Like so much on “Goji” it’s one that once it permeates into your conscience is a work of immense skill.

Their debut “Where Are Your Gods Now” was superb and caught the eye of many, not least Clutch, who offered a support slot on the back of it (it was with Maryland’s finest that we first saw them too). “Goji” is a different type of album, but it’s a notch on from what had gone before, which makes it pretty exceptional.

No longer a promising band, General are one who has delivered. And how. We are still really sorry, though.