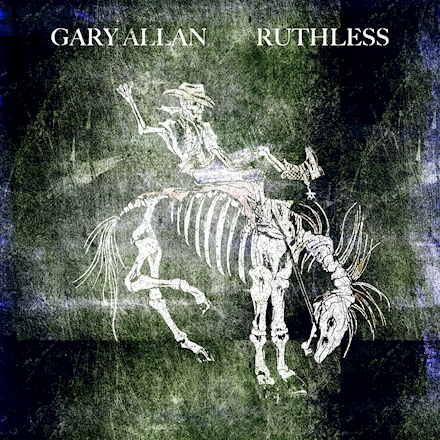 “Ruthless” is Gary Allan’s first album for eight years. And it’s one he’s proud of: “This is a montage of everything I have done since my last album, it’s what I love.  I remain influenced by the ‘90s — as well as by the ‘80s.”

This is the part where I tell you the truth. He might have been doing this for 25 years, but the first time I came across Allan was when I found that Kendell Marvell wrote one of his big hits.

He is from that school too, the country pop star. Those little words: “for fans of” would be followed by Eric Church, Chase Rice, Eric Paslay. You know the drill. It’s right there from the opening of  “Temptation”. Made on some crossroads where rock, pop (check the strings, seriously!) and country meet, it proves my point.

Just like whether you drink or not you can’t resist the brilliant “Waste Of A Whiskey Drink”, and its clear that what you are dealing with here is something that isn’t arsed with bumming around in the minor leagues. Allan wants to swing big.

This type of country generally speaking gets itself into two camps. The long lost love sort or the red, white and blue bombast. Aside from proffering support for Governor Schwarzenegger once upon a time, there’s nothing political, it seems to me, about Allan. Instead, “Till It Felt Like You” is one of many that tug at the heart-strings, and does it well.

“Slide” (and not just because of the title) has a touch of the Goo Goo Dolls about it, and when the acoustics and slide guitar come out for the glorious ballad “Pretty Damn Close” it is tempting to imagine this being the soundtrack to every slow dance there is in the heartland.

There’s a battery of producers on this (including Allan himself). One of which is Jay joyce, who has worked with Bon Jovi. “High As I’ve Ever Been” is like JBJ’s attempts to “go country” if you will, while the superb “What I Can’t Talk About” is proper troubadour stuff. And highlights, perhaps, the importance of these songs.

“S.E.X” adds a bit of soul, and its kind of cool – it’s cleverer than it might have been too as it breaks the taboos. But – partly because I am exactly the type of prude that the song is aimed at, I guess –  I prefer the Americana of “Trouble Knows Trouble” (it makes me blush less, to be fair).

The title track is a cracker too, sun-kissed like The Eagles, and “Unfiltered” lays it out clear: I love Jesus, Mama, Cash, and Rock and Roll and if this album could be distilled into one line, it’d be that one.

“Little Glass Of Wine” is a foray into easy listening, and if you were not, perhaps, expecting it, then it is done with a kind of late night Rat Pack cool, although “The Hard Way” is better. Raised on the same blue collar roads as Springsteen and Steve Earle, it’s a mighty thing.

“Ruthless” is a polished collection. No warts and all here, but that wouldn’t be the point, this is exactly the album it is supposed – and needed – to be.