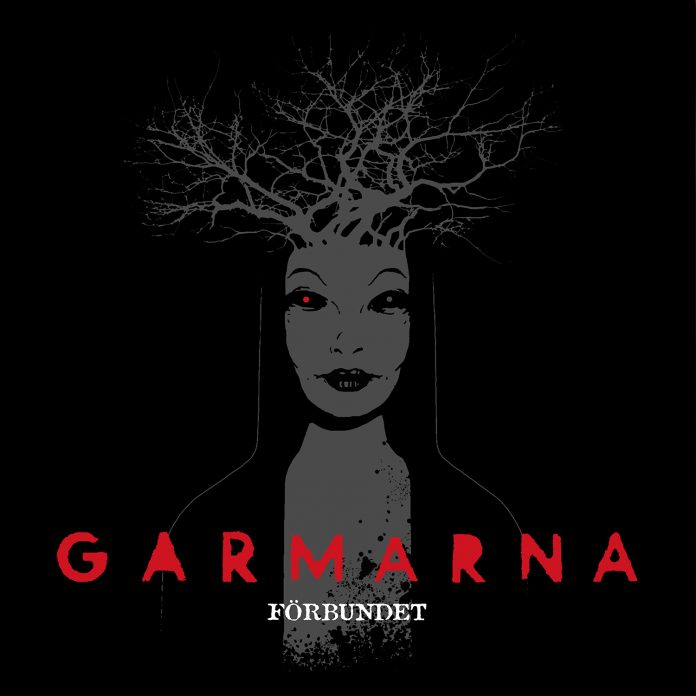 Swedish folk-rockers Garmarna were formed as a trio in 1990 featuring guitarist/violinist Gotte Ringqvist, violinist/hurdy gurdy player Stefan Brisland-Ferner, and guitarist/bassist Rickard Westman. After a couple of years, they accrued drummer Jens Hoglin and soon after violinist and singer Emma Hardelin. They released their self-titled EP in 1993 and have their seventh studio album ‘Förbundet’ due this month. As with previous albums, “Förbundet” serves up traditional material infused with original ideas, looking to medieval and murder ballads and Estonian chorales for inspiration. It is certainly a dark album.

The album opens with `Ramunder` a ballad from the 1700`s and it`s a wonderfully hypnotic offering with a drum beating at the heart of it. Anders Norudde from folk band Hedningarna guests playing moraharpa (a cousin of the hurdy gurdy) on the track. The song tells the tale of a fierce warrior that ravages his enemies for the sheer joy of it. Emma Hardelin`s vocals are delivered almost matter of factly above this mix of folk meets metal which gives an underlying feeling of menace to this piece. There`s a compelling feel about `Två Systrar` a tale of betrayal, revenge, and sibling rivalry. This, kind of folk ballad, ebbs and flows along a winding path. Maria Franz from experimental folk band Heilung adds her vocals on this powerful almost gothic tune.

`Dagen Flyr` could have been quite a sombre song as the lyrics concerns old age, a goodbye to life and a welcome of sorts to inevitable death. But instead it`s quite mesmerising with an almost native American feel as a thumping drumbeat accompanies the irresistible vocals, interspersed with some marvellously complementary violin snatches. The pounding drums and frenetic strings drive the moody `Sven i Rosengård` a Swedish murder ballad relating a brother killing his brother and fleeing the country but despite his mother’s pleadings he will not return home. The song has an almost Celtic feel.

`Ur Världen Att Gå` is a calming acoustic ballad which allowed the bass, drums, and Emma`s vocals to shine, a really additive composition. A song that has been described as being about life’s crossroads, grief, and losing someone, and also memories that are slowly erased or that can last a lifetime comes with `Vägskäl` It`s tranquil, ethereal and quite haunting but entrancing nevertheless.

`Lussi Lilla` seems to bounce along at pace and has some intricate wordplay and some interesting violin snatches but it wasn`t a track I really warmed to. A tale of a girl who defends herself against the King`s courtiers with her brother`s aid and when the King finds out he rewards her with a golden crown. There`s a redolent sense of unease about `Avskedet` which has a haunting aura about it. A tale of saying farewell and of accepting one`s destiny. Supremely enthralling.

The album closes with `Din Grav` a brooding, contemplative electronica offering with a dreamy vocal accompaniment. A meditation about the grandness of humanity, even in the most hopeless situation imaginable. A delicately eerie arrangement to end on.

I`d not come across Garmarna before but have to say “Förbundet” was a perfect introduction for me and has whetted my appetite, not only for more from Garmarna but also the guests that appear on this release. The songs are sung in the bands native language but once you put that to one side it doesn`t distract from the beauty and splendour of their music. There seems to be a world of Nordic folk and folk/rock fusion artists out there waiting to be explored with Garmarna leading the pack.

Previous article
BAND OF THE DAY: THE RUPTURED DUCKLINGS
Next article
ROB JOINS THE SEPS