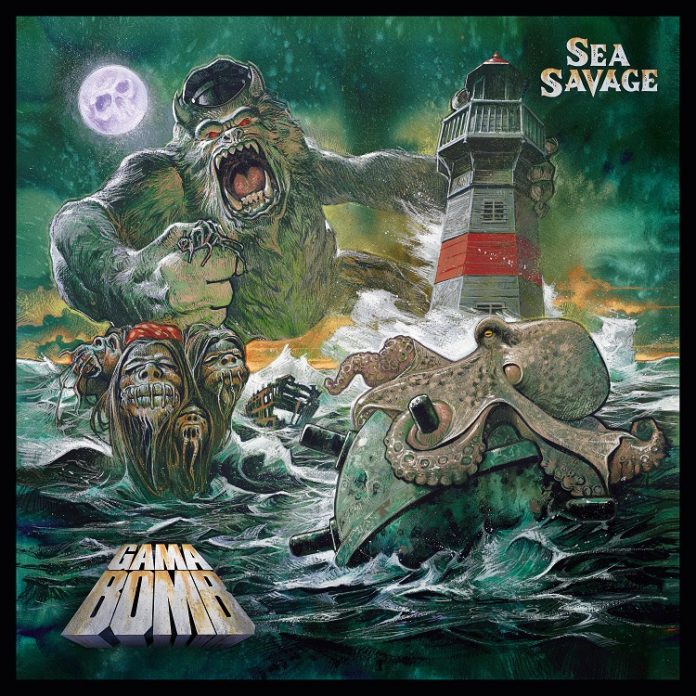 There’s a song on “Sea Savage” which rejoices in the wonderful title of “She’s Not My Mother, Todd and I am going to come right out and say that this verse is all – really – you need to know about Gama Bomb.

“Yeah maybe I like explicit lyrics,” says Philly Byrne – who formed this band in 2002 – “maybe I like titty magazines, and drinkin’ Coors, sniffin’ glue, tossin’ my hair to one side and ….what are you gonna do about it poindexter?”

The most 80s sounding lyrics of all time? Maybe, but a deeper truth. That is Gama Bomb, its their sound.

This is 80s thrash, and by that I mean, it takes “Toxic Waltz” as its starting point, adds some proper metal, and gets down to business moshing in its hi-tops.

Now, the band themselves would like you to believe this is a concept record, something about nautical, I dunno – there’s an ace pic of them dressed up like Captain Birds Eye’s grandchildren I can tell you that. Concept records leave me cold at the best of times, but somehow especially here. All I wanna do is thrash like a maniac, not read about Moby Dick.

And, well, this gives you ample chance to do that, and no messing. “Judo Killer” sounds like Judas Priest drank a lot of Sunny Delight and made “Painkiller”. There’s a child-like innocence to this, like its just a group of mates getting together to drink beer and play the music they love.

But this is 2020, so that’s not what actually happened. No, rather this being 2020 it was recorded in lockdown with the band members all around the world. This included new drummer James Stewart (Vader, Decapitated) and he is in incredible form. Not least on the title track.

“Sea Savage” as a whole sort of walks the line between the serious, the goofy (80s word, but apt) and the downright insane. “Miami Supercops” is one of the latter, and is perhaps best described as what Slayer would be like if they did children’s parties.

Whatever it does though, “Sea Savage” thunders. “Iron Blood” is as chugging as thrash gets, and the way the bass of Joe McGuigan anchors everything down is sensational, “Lords Of The Hellfire Club” is very much “his” moment, while “Sheer Khan” (one of only two songs here that are over four minutes long) is a proper “metal” thing as opposed to thrash.

This is a catchy, and fun record. Singalongs are possible to most of them, “Rusty Jar” is a good example, but it all belongs in a sweaty gig, beer flowing and moshpit being created. “Monsterizer” and the crackers “Ready, Steady Goat” are your clues that nothing here takes itself seriously and neither should you.

“Electric Pentacle” is a real maelstrom from the old-skool, which is an epithet you can merrily apply to “Gone Haywire” – and if we began with a quote from the lyrics, we might as well end with one too. “We want an aneurysm every Friday night!” is more than a line. It’s a life goal that everyone here shares,