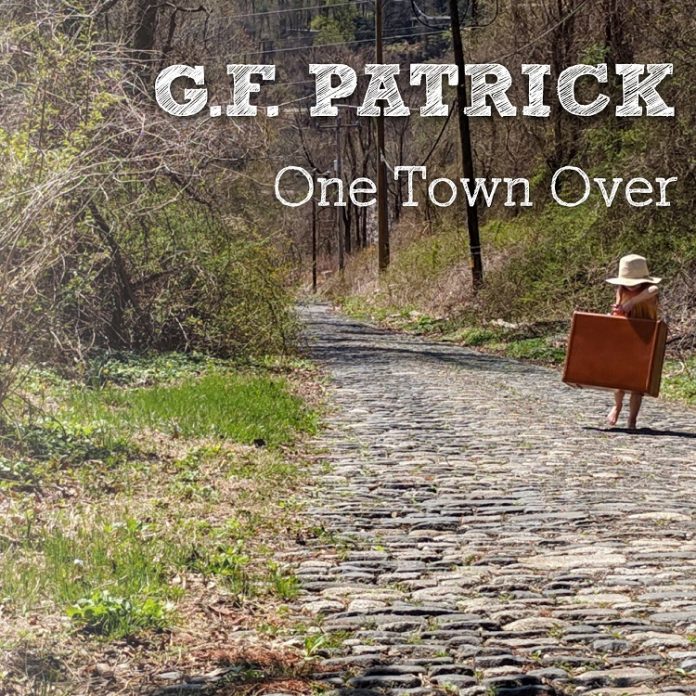 On his debut solo record (he’d previously been in Black Horse Motel) G.F Patrick weaves so many characters, scenarios and stories across the 15 songs here (officially its 14 but there’s a “hidden” track too) that it is difficult to know where to start.

It’s difficult to know where the characters end and Patrick starts too. An example is the wonderful, “Six String Directions”, essentially and ostensibly a love song to being a troubadour and the guitar but so much more. “And I don’t know if you’ve noticed,” he sings. “But the gas station pumps don’t pump hope. And the bill collectors call you. Hang accusations around your neck like coarse ropes.”

And the reason I started with that one is more than it is one of the best here, but instead it is indicative of “One Town Over” in general in that it is so multi-layered, so gloriously multi-faceted that it is doubtful you will ever peel away all its layers.

It’s no exaggeration to say that I have listened to this way more than I listen to most of the records I review. Each time I did I heard something I hadn’t the last time. As a result this review is my feelings this time, if you like, rather than for all time.

Which is odd, because as soon as I heard “Mud” – the opener – I thought I’d got it sorted. Working class dreams, mired in dirt and forgotten in time, over a kind of Whiskey Myers soundscape? Southern rock, then. No. Patrick is from Pennsylvania (by way of Georgia, in fairness) but he’s more savvy than that anyway.

“Truckers Song” is rooted in the Highways, it is elevated by the wonderfully evocative guitar of Mark Blasquez, but its what the trucker is escaping from that is interesting: “But all these figures endlessly won’t hide away from me the only number I can’t bring myself to call,” is such a plaintive line.

They are everywhere you look.

“Refugee’s Plea (Jungle Prayer)” is a such an emotional track, and in this horrible age of “populism” it should be played in schools every morning, frankly, the couplet about faith: “Why do you tremble at my sad religion. It’s done you no more harm than yours has done to me” wraps up the pointlessness of religious hatred in 10 seconds.

The title track – written about a friend of Patrick’s – is more instantly classic songwriting, and the folky turn that “Tennessee” takes, more acoustic, country flavoured, is proof, really that this could have been anything.

“Anger Of Magdalene,” is the best thing here (with the caveat “on this occasion” – see above) equal parts Subterranean Homesick Blues and Drive-By Truckers, it is also a murder ballad. Unlike any you have ever heard before.

The strings of “Butterfly Effect” wrap themselves around a song about Patrick’s new-born daughter, while “James McGovern” is exactly the type of song that informed the recent Steve Earle record, a tale of a miner with black lung it’s more poppy shuffle is at odds with the lyrics, but that’s the skill here.

A frequently harrowing collection of songs, is arguably at its rawest on the lap steel drenched “Blood On The Bottle”, although the incredibly dark “Like Father”, takes a look into the “battle with the beast” that is depression, although “Till The Day We Die”, perhaps incongruously finds some light at the end of the tunnel, despite the hook line: “My reflection is the devil and the mirror is my hell” – a kind of acceptance is at play here.

“Beauty Fades” is worthy of Tom Petty, and the harmonies are superb, and although “Water Rising Up” is – like all of them – brand new and self-penned, it has a real traditional, almost blues taste.

Strangely, this doesn’t feel like a record from 2020. It feels like “One Town Over” could have emerged pretty much at any point in the last 30 years and still sounded as relevant and brilliant as it does right now.

G.F Patrick is a songwriter of rare skill, that much is clear. I’ve mentioned Steve Earle once already, but I will do so here again. At the turn of the millennium a mate of mine handed me a compilation CD he’d made of Earle’s song. Thus began a love of this music. I make no apologies for saying G.F Patrick has, here, come up with something that gives me the same rush. “One Town Over” is probably the best “Americana” (whatever that means) record of this year so far. It is truly brilliant.