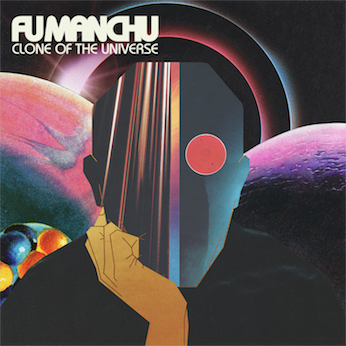 Fu Manchu get lift off on their latest mission

It’s like the unwritten rule of press releases. A band releasing an album is almost duty bound to say that “we think [insert album title here] is the strongest we’ve ever done.”

It’s been going on since time began, most likely. Somewhere, probably, there’s an interview with Lars Ulrich in which he’ll claim with a straight face and most earnestly that “’St. Anger’ is without doubt our best record.”

In the build up to “Clones Of The Universe” – the 12th album into Fu Manchu’s career –  their founding guitarist, Scott Hill said this. “We think it’s some [ of ] the strongest music we’ve ever done. We really love the overall sound of the album.”

To separate the fact from the hyperbole, its like this: history will judge where it stands in the pantheon of their stuff. What we can say with absolute certainty right now is that the seven songs here are superb.

Made for vinyl (as realistically all FM stuff surely always was?) the whole second side of “…Universe” is taken up with “IL Mostro Atomico”, which is not only appropriately monstrous (it means “atomic monster” in Spanish) but the sprawling, near instrumental (it takes nine minutes before any vocals at all and even then only for the briefest interludes) includes the one and only Alex Lifeson of Rush bringing his skills in a quite wonderful fashion.

If that is the absolute manifestation of Fu Manchu’s belief that the mighty power of the riff can heal all that ails, then it is also interesting that other six songs here – which think exactly the same – take up about the same length of time as the concluding track.

All of which means that they are shot through with a real urgency and a desire to just get your head down and get rocking. “Intelligent Worship” is choc a block with primal intent. Rock n roll in its most basic, and if “(I’ve Been) Hexed” is slower, a little more monolithic perhaps, it still packs a punch. It is noticeable too, that the double tracking of vocals that the band often uses is very much in evidence here.

Even on the visceral ones like “Don’t Panic” – two minutes of gleeful fun – there is a sense that they are merely waiting to spread their wings and this one even includes a bit of Led Zep circa “Black Dog” drumming.

“Sower Than Light” sounds trippy (and most probably is) and “Nowhere Left To Hide” is built around a strident beat which pummels hugely, while the end of side one is the title track, which is every inch what we might call the classic Fu Manchu sound and you can almost smell the sweat-soaked headbanging scenes when it is played on the bands natural habitat of the stage and the devil may care attitude here is shown wonderfully in the lead breaks at the end.

That said, though, even if that is the title song then let there be no doubt at all of the centrepiece. Most certainly not in a Rush – if you’ll forgive the awful pun – the epic ends a record that is, in every sense of the word (in English or Spanish) a real monster. “Clone Of The Universe” is nothing more than fuzzing great.