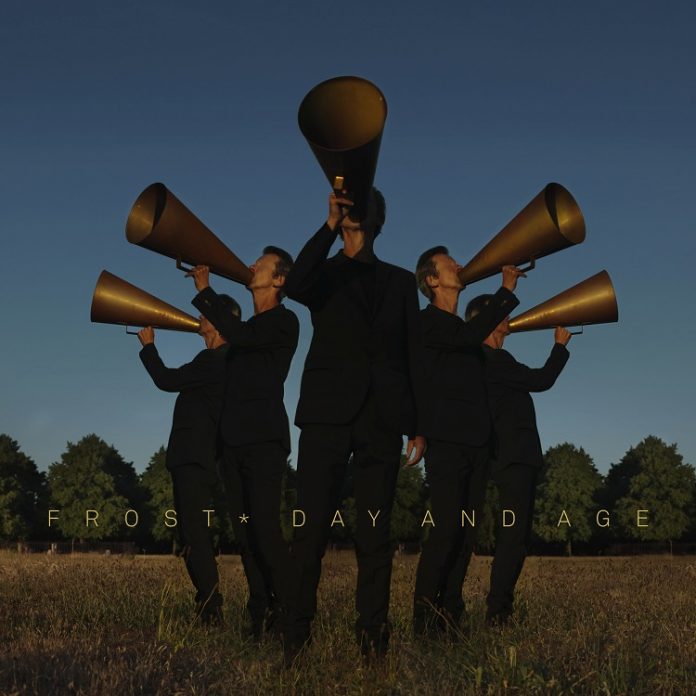 I’d bought the cassette after school and I was in bed listening to it on my Walkman. After the last song, there’s a break and a girl’s voice comes and goes “Stephen”.  I damn near shit myself.

In 2021, Frost* were about to release “Day And Age” and I am listening to the MP3 on iPod and at the end of “Waiting For A Lie” – which comes at about halfway through the journey (an apt word, as this is less a collection of songs as an event) and a girl’s voice comes in and says “wake up!”

Dear god. Not only did I wake up, they’ll never make me sleep again.

And, that might, to be fair, be something of summation of Frost*. They are an incongruous listen – dividing the opinion of even Prog fans – on one hand original members Jem Godfrey and John Mitchell construct pop choruses (listen to “Day And Age” and tell me it isn’t) but its just that they wrap it round a harsh landscape that begins with the same girl who scared me to death telling me to “enjoy yourself, you scum”.

The 11 minute opener, would normally be given epithets like grandiose, but that doesn’t apply here, given the way they do it. There’s harsh electronics, metal guitar and something of a barren landscape.

Maybe that can be explained by the environment. After writing recording the first batch of songs in the Cornish winter in 2019, they decamped, in Jan 2020 to Dungeness in East Sussex. “We were 30 feet by the sea,  next to a nuclear power station and a lighthouse, in midwinter! So there was hardly any daylight and the weather was dreadful” as bassist Nathan King put it, and the songs they wrote there, like “Terrestrial” are as barren as that sounds, indeed, even when it explodes in the chorus it does so in a way that sounds bleak.

The follow up to “Others” which was an EP that came from these sessions, “Day And Age” is brave, and even for Frost* a head-scratcher.

“Waiting For The Lie” built around loops, both on the piano and also in the harmonies, is strangely brooding, lurking in the shadows, and the lyrics are similarly opaque. That’s the rugged beauty of this, that it could mean everything, and nothing all at once.

“The Boy Who Stood Still” is a spoken word (in the main) story about a boy who could turn invisible. The stuff of usual Sunday night TV, it ends on a cliffhanger, and is anything but a conventional track – but then, this is not a conventional band.

So much so that they weren’t arsed with a regular drummer this time around (former sticksman, Craig Blundell left), instead, what they’ve done is use three guest drummers, with the idea of building the tracks around each of them.

“Island Life” is almost welcoming – written in the Cornish sessions – and jangles along in a kind of indie fashion, before the lush strings. “Skywards” throbs with a dark electronica, not too far from the Fish record last year, in truth.

On a record that has many high points, “Kill The Orchestra” is one of the best. At nine and a half minutes its one of the longest, but its worth the investment. And is perhaps – if you’ll pardon the tautology – the most “conventional” modern prog example this has to offer too – right down to the downtuned Between The Buried And Me-esque heaviosity (which befits a hook that goes “I’ll be singing when they string you up”)

“Repeat To Fade” is the one, though. Operatic, inhospitable, and with Michell screaming “enjoy yourself you scum” over a Stabbing Westward type soundscape. If ever you wanted to talk about what this band does, its here.

And as the credits roll, metaphorically – the same voice appears. “Subservient, in essence”  and you realise this whole endeavour is about the human condition. And, just like life, “Day And Age” is hard, relentless and rewarding.

BAND OF THE DAY: MERCURY CIRCLE