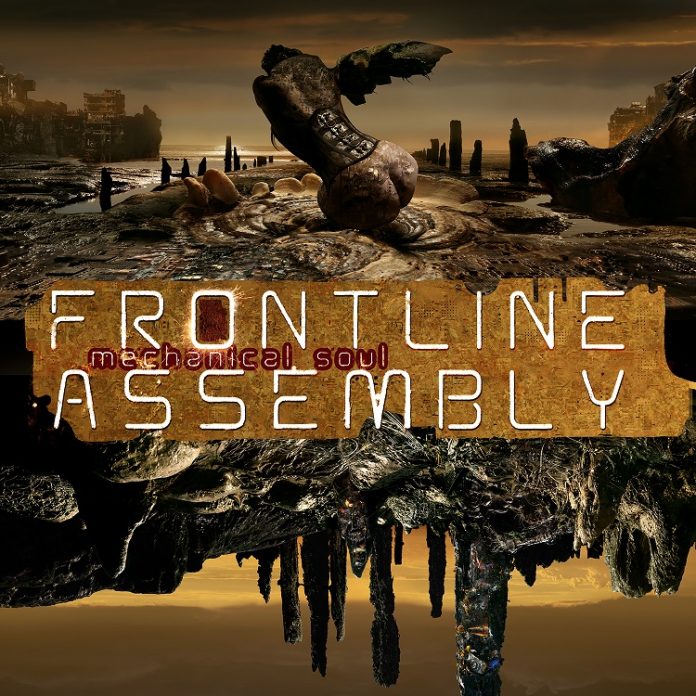 Front Line Assembly is a name known to me, but I would have to admit I am unfamiliar with their electro-industrial brand of music. A little investigation and I find that the band were formed by Bill Leeb in 1986 in Vancouver, Canada after leaving Skinny Puppy and joined by Rhys Fulber a couple of years later. They have just released their seventeenth full-length studio album “Mechanical Soul”

The album kicks off with `Purge` and there`s a relentless almost sequenced hammer effect laying down a marker for this driving thumping slice of hypnotic menace with vocals that are there but almost inconsequentially to the overall effect of the number. A clanging death knell opens up `Glass And Leather` before it takes on a high energy electronic vibe with some strange lyrics about driving naked.

`Unknown` has a rapid pounding beat and with the breathlessly shared vocals there`s a bleak quite post-apocalyptic feel about the number. I felt there was a much more introspective texture to `New World` and the lyrics appeared like they were shared through a vocoder adding to the impression of a vast open landscape of a freshly discovered planet.

`Alone` churns along with a rhythmic beat setting the pace as the vocals present a sense of isolation, of someone who interacts with mankind on their own terms. Jean-Luc De Meyer from Belgium EBM band Front 442 adds his vocals to `Barbarians` a reworking of the song “Future Fail” from Front Line Assembly’s 2006 album “Artificial Soldier”. It`s a much slower version that allows the vocal to shine and not get lost in the mix but still retaining that unnerving edge.

I`m led to believe that `Komm, stirbt mitt mir` translates to `Come die with me` and it`s an interesting number that is sung in German and to me had me thinking that if Kraftwerk went electro-industrial this might very well be what they would offer up. Although `Time Lapse` is the shortest track on the album it`s a curious offering with a quiet sort of electronic heartbeat throughout with swathes of synth waves enveloping it as it proceeds.

This release closes out with `Hatevol (Black Asteroid mix) ` a remix of the song that was originally on “Wake Up The Coma” and mixed by techno project Black Asteroid`s Bryan Black. It`s a much more thumping, in your face, striding piece. As it fades and some time passes a further hidden track arises, an almost ambient couple of minutes respite but an unexpected bonus all the same.

I have to say I did enjoy “Mechanical Soul” and felt that after three decades the guys could have sat back and rested on their laurels. But no, these trailblazers and pioneers of electro-industrial music have presented something a little different with a couple of well-chosen guests to offer an alternative flavour to a couple of numbers and a reimagining of a previous track that will spark some debate between long time fans as to which is superior. Once again Front Line Assembly have raised the standard for others to follow.