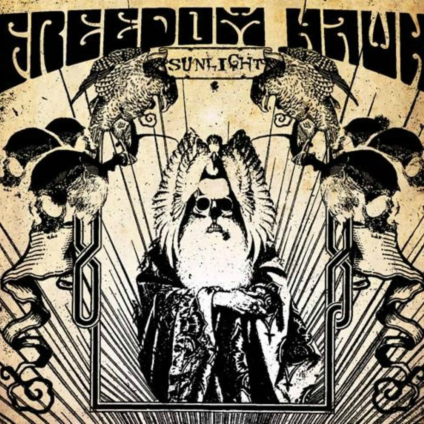 Much like the Star Wars movies (MV is probably the only person on the planet that hasn’t seen anything after “Return of the Jedi”), in the case of Freedom Hawk, the last one was the fourth and the new one is the first.

To be accurate, “Sunlight” isn’t the new one at all, but the long-lost debut record from Freedom Hawk. Originally released in 2009, it is now getting a full release from the always incredible Ripple stable.

FH’s 2015 “Into Your Mind” album was a knockout classic, and the good news is “Sunlight” isn’t far behind.

Pioneers of the retro-rock movement, the Virginia based mob were evidently always a cut above the rest as these nine songs adequately show. Whilst it isn’t in any way a departure from their later stuff, “Sunlight” does perhaps tend towards being slightly more psychedelic when it wants to be and a touch more thumping and raw when it chooses too.

The opening pair are all you need to know really. “Executioner” is haunting and a trippy, but things really get cracking with the marvellous “Land Of The Lost” which cheerfully packs more fun and frolics into three and a half minutes than it has any right to.

From here it is anything but a band finding their feet. Instead Freedom Hawk are very obviously a band full of clear direction. The title track is a riff extravaganza, with a wonderful lead sound. “Stand Back” is more blues infused, perhaps, but when this record works better is when it gets its head down, it’s horns up and it’s foot on the monitor. It does this brilliantly on “Lightning Charge” which shows itself in on a wall of sound doesn’t leave without creating damage.

Of the more sprawling ones, the knowingly understated – and almost reggae tinged – “Going Down” is probably the pick and as if to prove Freedom Hawk were some kind of trailblazer, this would fit snugly on a modern day Lionize album.

There is nothing here that isn’t in the highest of high class. “Palomino” boasts a truly mighty opening riff, and “Grab A Hold” – one of the longest cuts here – you can bet would have been a real thrill to see played live back then, when surely it would have been turned into a Led Zep-esque jam.

If there’s nothing in the music to date it as an album from the turn of the last decade, then the fact there’s a “hidden” track a few minutes after the end of the sonic maelstrom that is “King Of Order” might. All the rage back then and before, this one is a kind of proto Grateful Dead funky freak out, and actually ends up being great fun.

If you heard “Sunlight” back in 2009, then kudos to you, if you didn’t, then make sure you do now – and then check out Freedom Hawk’s back catalogue. They deserve it and so do you.