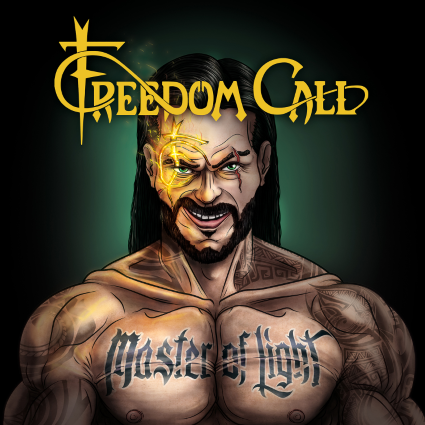 Messages from the metal wonderland

Metal is for everyone/the sound is made of steel

Or in other words: Welcome back Freedom Call.

Those two lines are from the opening track on Master Of Light and encapsulate everything you need to ever understand about FC.

This is a world where there’s never been a problem that can’t be saved by the power of metal, or for that matter, a dragon that couldn’t be slayed by a mighty sword of steel. Choruses soar, guitars chug, and drums go at a million miles an hour. “Hammer Of  Gods” surely needs no further discussion, except to say this: it like everything else here, nails it.

And that’s because of this key fact. Chris Bay and his merry band of metal clad brothers understand that they are essentially preaching to the converted here. Power Metal, whether its Manowar or Dragonforce or the countless others that try this, only works when it’s as gloriously OTT as this. It simply has to work in a world where everything is bigger than everything else.

In that context, then Freedom Call are giants.

They’ve been doing this sort of thing for nearly two decades, deep down they surely must understand that songs like “A World Beyond” are ludicrous. Does that stop them being superb? Hell no! It’s six minutes of power perfection.

So if you get it, you get. You put on the denim and the studded belt and you get your fists in the air, and you love things like the title track which is like the others but adds some parping keyboards and an enormous hook that goes “whoa, whoa” just because….well, just because it damn well should.

“Kings Rise And Fall” starts off like a prog song  – for all of about five seconds, before the double kick drums thump in again, while the gorgeous “Cradle Of Angels”  has a whiff of greatness, and “Emerald Skies” should be the theme to “Game Of Thrones.”

“Hail The Legend” deals with the afterlife (presumably we are all reborn in metal) and “Ghost Ballet” breaks through some Dream Theater like stuff at the start to summon all kinds of monsters.

And frankly the point of this is there’s no point all. It’s fun, it’s supposed to be escapism, and “Rock The Nation” with its thought that “the good times rock the nation” is an extension of that. Moreover, the world would be a better place if we all took a leaf out of these books.

Another truism is that people who don’t like metal at all think all metal sounds like Freedom Call – so they duly play up to that with “Riders In The Sky” which is simply brilliant.

MV has seen Freedom Call live a couple of times. One of these was at a small club in Birmingham about six years back. It was a Sunday night, the crowd was tiny, but one of them a young kid of about 16 turned up dressed as a wizard and waved a wooden sword he’d made himself throughout the set.

No one thought this odd.

For him, hell for all of us who love power metal, sing it to the heavens as the Celtic infused “High Up” ends this. All hail Freedom Call. They are the masters.