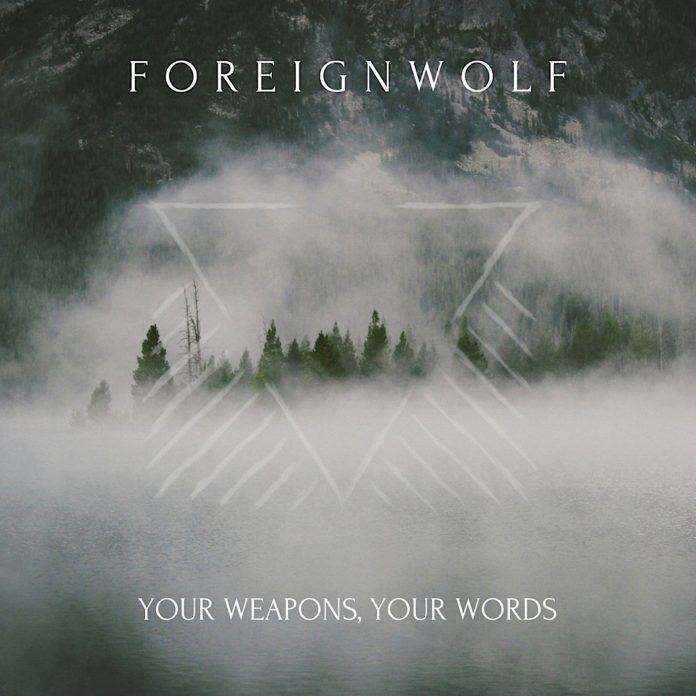 ForeignWolf are a heavy alternative rock come grunge band Formed in 2019 in Belfast and are comprised of Gerard McCann (lead vocals & guitar), Dave Brady (lead guitars & backing vocals), Justin Lee Jamison (bass), and Mick Teague (drums). They released their debut EP `Tempered Hearts` in 2019 and have a new four track EP `Your Weapons, Your Words` out this month. The band have shared that the subject matter encompasses the difficult topics of depression, anxiety, and mental health issues.

This extended play opens with `Alone` a song relating the story of a manipulative relationship. It`s a grinding blistering rock out that races along with all you`d expect from a seasoned rock band. There is a slight respite just over halfway through where a shimmering guitar riff allows the vocals a quiet reflection of the situation before pounding drums draw us back in and an almost scream of desperation brings the number to a conclusion. The intensity continues with `Afterthought` which sprints along with much more aggression and belligerence. The track deals with depression and anxiety and the positive benefits of seeking help. At times, the vocals near a sort of forceful growl but I thought the short interlude where the pounding drums, driving bass and delicate guitar riffs were allowed to shine was a stroke of genius. If anything, this reprieve drove the guys to up the anger level of the music as the number closed out.

A string arrangement opens `No Limit` a song that deals with addiction, whether alcohol, sexual, drugs or any others. It has a quite vast nigh on expansive feel with a little edge that`s maybe reflective of the subject matter. There were occasions where you could hear the pain or angst in the vocal delivery. The guys close out with `Gradual Destruction` which is the least hostile number offered up and had a sort of melodic Deftones touch about it. It leads you along with an uneasy calm before the storm texture with vocals and drums leading the line. A quite introspective piece about feeling undervalued. Again, it has a few more vigorously heavy passages as it progresses. A thoughtful and contemplative submission to end on.

There was much to enjoy with ForeignWolf`s latest release and I have to admit I don`t listen to as much heavy rock as it used to, so it has maybe reinvigorated my love for this genre of music. The guys were due to tour, but the current pandemic has put paid to that but i`ve now added them to my list of must see bands.