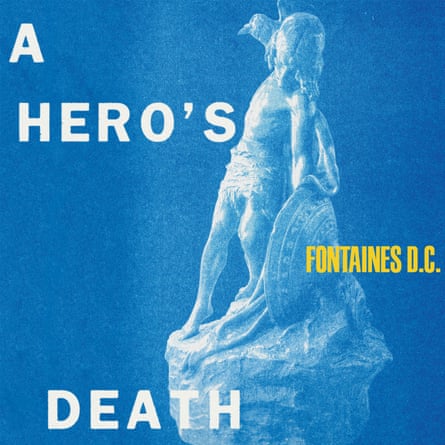 I`m sure Fontaines D.C. really don’t need an introduction. Their rise has been almost meteoric but justifiable. They`re a band that came together is a more unique way to most, having met at the British and Irish Modern Music Institute in Dublin, believing poetry could change the world and releasing two small volumes of poetry `Vroom` and `The Winding` before forming the band. Their debut album “Dogrel” was Mercury Prize nominated and the guys have been on the road constantly until the current global pandemic put paid to that. In less than fifteen months the band have a follow up album in `A Hero`s Death” whose title was Inspired by the line “everybody’s looking for a hero’s death” in The Hostage, a play by Irish poet, short story writer, novelist and playwright Brendan Behan.

The album opens with `I Don’t Belong` a song of separation of not belonging or wanting to. The chorus of “I don’t belong to anyone” and ending with “I don’t wanna belong to anyone” repeated throughout supported by churning guitar and drums becoming an almost hypnotic chant. `Love Is The Main Thing` is a more elegiac piece with a repetitive drum beat and some interesting guitar chords which at times had a Duane Eddy twang and Grian Chatten`s quite remote vocals sharing the seemingly sardonic lyrics.

`Televised Mind` is a real thumper that the band have been playing live for some time. When asked what the song was about it was reported that “This song is about the echo chamber, and how personality gets stripped away by surrounding approval. People’s opinions get reinforced by constant agreement, and we’re robbed of our ability to feel wrong. We’re never really given the education of our own fallibility”. There`s a real Prodigy `Firestarter` vibe about this track. Shimmering guitars and a thumping drum beat throughout lead a cacophony of noise on `A Lucid Dream` with the lyrics spat out. A number that will have the faithful smashing into each other in circle or mosh pits, when it get a live outing.

`You Said` is quite a melancholic, anthemic and contemplative piece played over some quite gentle but intricate guitar lines from Carlos O’Connell and Conor Curley. A song that was composed in a hotel room after one particularly listless and depressing day in Brussels. The haunting `Oh Such A Spring` had aspects of `Back Home in Derry` A folk like offering, a lament for conceivably better times gone by.

The title track `A Hero’s Death` has the repetitive mantra of “Life ain’t always empty” a positive thought reiterated over a Stroke`s like riff. It was inspired by advertising messages with the constant repetition of catchy sentences that imply the terrifying idea that humans are products. There`s a real punk aesthetic to `Living In America` it has quite a stark sound about it and reminded me of `Warm Leatherette` from Daniel Miller’s project The Normal. A seemingly dystopian outlook with vocals almost blead into the supporting musical onslaught.

`I Was Not Born` had shades of Bristolian art rockers The Blue Aeroplanes. It`s musically lighter but with a rightful lyrical not arrogance or contempt but an honest statement of the narrator`s purpose for being brought into this world and rationale for living. There`s a real country feel to `Sunny` a laid-back easy-going number that seemed to be a bit of a curve ball.

The album closes out with `No`, which could become the band`s anthemic stadium pleaser, a song in a similar vein to fellow Dubliner`s U2`s `Bad`. An effortless, stirring, emotive, impassioned but most of all a hopeful uplifting composition.

“A Hero’s Death” came out of the band, Grian Chatten, Carlos O’Connell, Conor Curley, Conor Deegan III, and Tom Coll. having been on the road constantly, struggling and finding themselves growing not only distant from one another, but distant from themselves. It`s a reflective, self-analytical offering that makes sense of what they were experiencing. A very personal appraisal proffered in real or imaginary situations. A cathartic opus where the group appear to have really matured with this work of art, evidently no second album syndrome here.